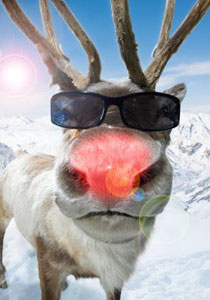 Rudolph's glowing nose would come in handy in Scandinavia, where there's little sunlight in the winter.
Coneyl Jay/Getty Images

So we know that Rudolph stands out a bit from other reindeer, but how could something like this have happened? Could Santa be some kind of a mad scientist, tweaking reindeer DNA for his own benefit, or could Rudolph's nose be a biological accident?

It's possible that Rudolph's bright honker could be a reindeer atavism. But what's an atavism?

An atavism is a trait of distant ancestors that randomly pops up in modern-day organisms -- a whale with legs or a human with a tail are two examples. These traits may have served a purpose for the animal way back when, but for whatever reason the trait was "silenced" over time, every once in awhile making a rare triumphant return in modern times. Could distant reindeer ancestors of Rudolph have needed to produce light in order to survive in the wild? You'll find most reindeer in Scandinavia, and it does get pretty dark there during the winter -- so could Rudolph's ancestors have needed a better way to get around at night?

But that doesn't explain why only Rudolph has a bioluminescent nose. When we look closer at Rudolph's childhood, however, it could be that his bright nose was a rapid evolutionary adaptation. It's possible that the real reason Rudolph couldn't play in all those reindeer games was due to his poor eyesight -- he developed the red nose in order to compensate, and it just happened to save Christmas when Santa really needed it.

Although his playmates treated him like a misfit in the beginning, Rudolph actually proved himself to be the stronger specimen. Determined to excel, he could have adapted out of necessity. The question now is whether or not future generations of reindeer could also take on Rudolph's unique traits.

For more holiday-related goodness, including Santa's sleigh, Santa's elves and fruitcake, see the next page.