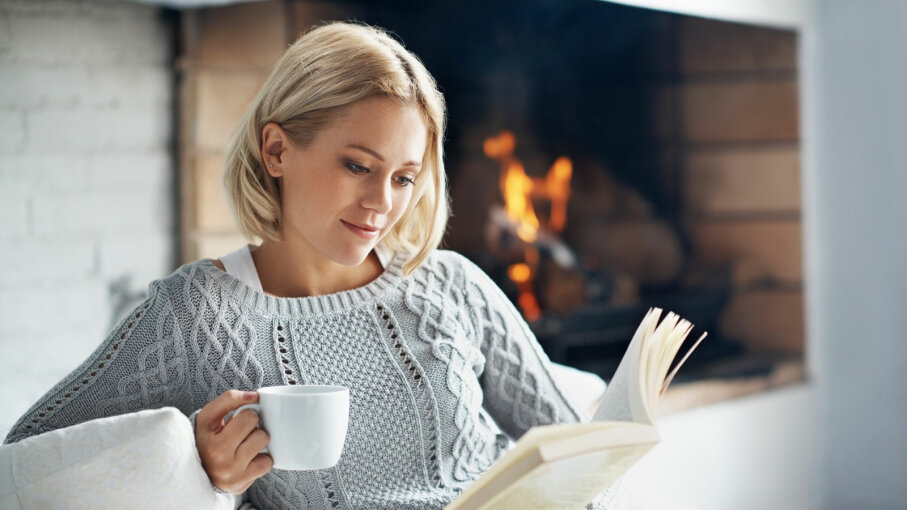 On Christmas Eve in Iceland, it's traditional to give books and then stay in to read them, perhaps with a nice hot beverage. kupicoo/Getty Images

When families in Iceland gather on a crisp Christmas Eve, there are several important traditions to observe. First comes a hearty Christmas meal (smoked lamb, fermented and pickled fish, all washed down with a questionable cocktail of malt beer and orange soda), followed by Christmas mass at 6 p.m. sharp and then, of course, the books.

In Iceland, where a vibrant literary culture has thrived since the Middle Ages, the most popular Christmas gift is a book. Toddlers receive bedtime picture books, teens get the latest John Green tearjerker translated into Icelandic, and adults are gifted a stack of bestselling Nordic crime novels and obscure self-published non-fiction.

The Christmas Eve book-giving tradition is the culmination of a months-long national literary celebration called jólabókaflóð or the "Christmas Book Flood." In September, the Iceland Publishers Association mails a book catalog called the Bókatíðindi to every home in Iceland (browse the Bókatíðindi 2018). And from the moment the catalog arrives until Christmas Eve, all of Iceland is gripped with book-buying fever.

Gísli Gíslason is a biology professor at the University of Iceland in the capital Reykjavik. Born in 1950, he was among first generation to grow up with the Christmas Book Flood tradition. During World War II, one of the only imports to Iceland that wasn't severely restricted or expensive was paper, so people turned to books as gifts.

"As long as I can remember, I've always received books on Christmas and I've always given books to my family," says Gíslason. "You get other gifts as well, but there always has to be at least one book."

Gíslason says that from September until December, books seem to be everywhere. If you walk into a grocery store in Reykjavik, right next the produce aisle is a huge table, maybe 50 feet long, covered with stacks of books. And that's in addition to those for sale in all of the book stores.

What's really remarkable about the Christmas Book Flood is that all of the books in the fall catalog have been published that year, and a crazy amount of them are written by Icelanders. This is a country of just 348,000 people and virtually no one speaks Icelandic outside of Iceland. Yet every year, the Icelandic publishing industry puts out five new books for every 1,000 people, most of them written in Icelandic. The average print run of 1,000 copies would be equivalent to selling 1 million copies in the U.S.

Like his fellow Icelanders, Gíslason says that he reads books all year round, not just during the holiday season. Historians trace the Icelandic love of literature back to the 12th and 13th century C.E., when Icelandic authors and poets wrote the first sagas, dramatic stories of heroes, kings and violent conflict that have been compared to "Beowulf," "The Iliad" and "The Canterbury Tales."

Since the Icelandic language has remained relatively unchanged since the first Norse settlers arrived on the island nation in the late 9th century C.E., Icelanders have been reading and treasuring these same stories for a millennium. Not only do Icelanders love to read, but they love to write. It's estimated that one in 10 Icelanders will write a book in their lifetime. There's even a popular saying, "ad ganga med bok I maganum," translated literally as "everyone has a book in their stomach."

In Iceland, presents are traditionally exchanged and opened on Christmas Eve. The kids go first, of course, with some of the littlest ones receiving their very first books. Then it's the adults' turn, says Gíslason, each member of the family receiving at least one or two books.

"You take the book with you to bed and read it before you sleep," says Gíslason. "And then you wake up on Christmas morning and keep on reading."