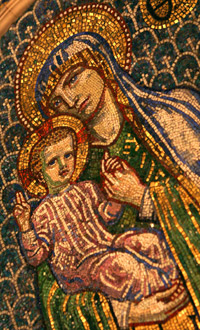 The Bible is fairly ambiguous about when Jesus was born.
John D. McHugh/AFP/Getty Images

­At Christmastime, you might notice signs amid residential light displays or on church boards that merrily proclaim "Happy Birthday, Jesus" or announce that "Jesus is the reason for the season." Of course, such messages are merely meant to remind people of the sentiment behind Christmas. But the signs do raise questions about the accuracy of Biblical dates and the history of the Church year.

But by the early fourth century, Church leaders decided they needed a Christian alternative to rival popular solstice celebrations. They chose December 25th as the date of Christ's birth and held the first recorded Feast of the Nativity in Rome in A.D. 336. Whether they did so intentionally or not, Church leaders directly challenged a fellow up-start religion by placing the nativity on December 25th. The Cult of Mithras celebrated the birth of their infant god of light on the very same day.

Church leaders may have also had theological reasons for choosing the date of Dec. 25th. The Christian historian Sextus Julius Africanus had identified the 25th as Christ's nativity more than a hundred years earlier. Chronographers reckoned that the world was created on the spring equinox and four days later, on March 25th, light was created. Since the existence of Jesus signaled a beginning of a new era, or new creation, the Biblical chronographers assumed Jesus' conception would have also fallen on March 25th placing his birth in December, nine months later.

To learn more about Christmas and Christmas traditions, check out the links below.

When Can We Open the Presents?