'The Tale of Three Trees' 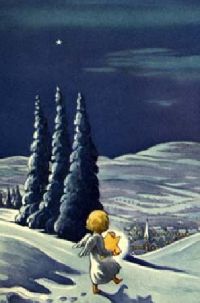 Three little trees stood high upon a mountain discussing their dreams for the future. The first little tree looked up at the dazzling night sky and said, "I want to carry the treasure of kings and queens. I want to be beautiful. I want to be filled with all the riches in the world."

The nearby stream caught the second little tree's eye. "I want to be a mighty sailing vessel," he said. "I want to sail in the roaring oceans, roam the high seas, and deliver kings and queens safely to their destinations."

One day, many years later, three lumberjacks came to help the three trees with the next season of their lives.

The first tree, now beautiful, was cut down. "I will become the most beautiful treasure chest," he thought. "I will get to hold all of the world's riches."

The mighty second tree was cut down. "I will now sail the roaring oceans," thought the second tree. "I will be the mightiest of all sailing vessels."

The third tree, with her branches stretched toward heaven, was also cut down. Together with the other two trees, she was taken down the lovely hillside.

The first tree arrived at a carpenter's shop. The beautiful tree was aglow with excitement. But he wasn't made into a treasure chest. The skillful carpenter made the beautiful tree into an ordinary feeding trough.

The third tree was brought to a lumberyard. There she was made into beams and put aside. "Why did this happen?" thought the third tree. "All I ever wanted was to touch heaven."

As the weeks passed, their dreams began to fade from memory. However, one magical night brought the first tree's dream to life. A young mother put her newborn into the trough. "This manger is perfect," said the mother to her husband. And the first tree knew he was cradling the most important treasure ever.

One night the fishing boat was used by a tired traveler and his friends. They quickly fell asleep, and the small boat floated out to sea. The sea became rough, and a thunderstorm was brewing. This frightened the second tree. If only he were a mighty vessel and could withstand the force of the storm! The traveler was awakened by the storm, and he stretched out his arms and said, "Peace." The sea became calm and the thunderstorm vanished. It was then that the second tree realized he was carrying the Almighty King.

On a Friday morning, the third tree was taken by soldiers and carried through a hostile mob. She trembled with fear and distaste as a man's hands were nailed to her. But the following Sunday the sun rose. The earth was full of joy. She realized that everything had changed because of God's love.

The first tree was made beautiful.

The second tree was made mighty.

The third tree made people think of God.

Our collection of Christmas Tree Stories ends with the story about a “special” Christmas tree everyone thought was too small. Read ‘O Christmas Tree’ to find out how this special tree turned into a bright and beautiful spectacle that would remain with one happy family forever.