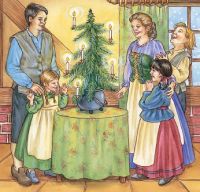 It was a cold winter's afternoon in the dense German forest. Martin Luther did not notice the sun slowly setting and the sky growing dark. His thoughts were on the sermon he was preparing. The forest soon came alive with the night sounds of owls, wolves, and other wild creatures.

Martin Luther shivered. He pulled his cloak tighter around his shoulders. Then he quickened his pace, saying a little prayer for comfort as he went.

The forest grew darker. Martin Luther scurried along, continuing to pray that he would not cross paths with a wild animal. He glanced up to see the night sky filled with tiny pricks of light, twinkling blue and silver. What could they be?

"Stars!" Martin Luther said suddenly, as he realized what he was seeing. "Lights from Heaven to guide and comfort me, just as a star led the Wise Men to the stable that first Christmas. What a splendid theme for my sermon."

Martin Luther smiled up at the twinkling sky. He was no longer afraid.

Feeling safer, Martin Luther looked around for a small tree he could take home for Christmas. He found a young fir tree, pulled it up, and dragged it with him through the forest.

At long last Martin Luther was safe at home. He quickly prepared the little fir tree, hoping to surprise his family.

"Hmmm," he said, as he noticed the triangle shaped candle holder on the table by the window.

Soon Martin Luther called his family in, so he could tell them about his long walk through the dark and dangerous forest. Everyone gasped at the sight of the little fir tree, for it was customary to hang Christmas trees upside-down from the ceiling beams and leave them undecorated. Yet, Martin Luther had placed this little tree upright in a pot, high on the table. The candles had been removed from the triangle shaped holder. Now, as the very first Christmas tree lights, they flickered from the tree's delicate branches -- just as the stars had flickered through the forest to guide Martin Luther.

The family gathered around as Martin Luther told them what had happened earlier that evening.

"Just as I was getting very frightened, I saw the stars twinkling through the trees as if God was saying, 'Don't be afraid, for I am with you.' And that's when I realized the theme for my sermon. God's light shines through the darkest night for everyone, but sometimes we have to look up to see it." -- By Suzanne Lieurance

The story on the next page, "The Perfect Tree," has a twist: It's told from the perspective of a little tree.