'Parade of the Wooden Soldiers' 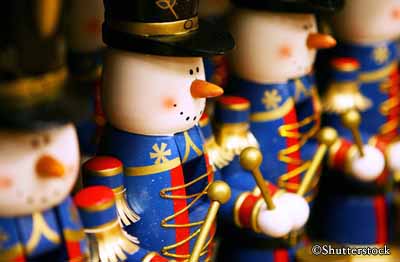 One hearing of the upbeat "Parade of the Wooden Soldiers" and you'll likely guess the song's German origins. It was written in 1905 and then "imported" to Paris after a Russian producer heard the lively beat, declaring it an ideal dance tune for the new musical review that he was preparing. The song was destined for international fame.

When the production moved to New York City, "Parade of the Wooden Soldiers" attracted the attention of lyricist Ballard Macdonald who had written for the great Ziegfeld as well as other producers. Though not as recognizable as the melody, his lyrics helped make this tune an American Christmas standard.

"Parade of the Wooden Soldiers" Lyrics

The toy shop door is locked up tight

And everything is quiet for the night.

When suddenly the clock strikes twelve,

The dolls are in their best arrayed

There's going to be a wonderful parade

Hark to the drum, oh, here they come,

Hear them all cheering, now they are nearing,

There's the captain stiff as starch.

As the wooden soldiers march.

Sabers a clinking, soldiers a winking

At each pretty little maid.

Daylight is creeping, dollies are sleeping,

In the toy shop window fast;

Soldiers so jolly, think of each dolly,

Dreaming of the night that's past,

When in the morning, without a warning,

Was ever out upon parade.

Caroling through the streets is a holiday tradition. See the next page to learn about a caroling classic, "We Wish You a Merry Christmas."