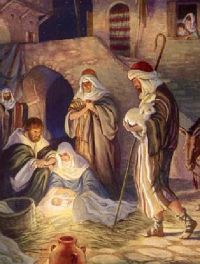 Fourteenth-century French socials often included the ritournelle, a lively court dance. One ritournelle melody survives as the song that became the French Christmas carol "Bring a Torch, Jeannette, Isabella." The central characters of the song might have served as inspiration for the two serving maids depicted at the nativity in a famous painting by Georges de La Tour.

The lyrics are said to have originated in either Anjou or Burgundy. They were paired with the melody and first published in 1553 by a wealthy nobleman in Cantiques de Premiere Advenement de Jesus-Christ.

Bring a torch to the cradle run!

It is Jesus, good folks of the village;

Christ is born and Mary's calling:

Ah! ah! beautiful is the mother!

Ah! ah! beautiful is her Son!

2. It is wrong when the Child is sleeping

It is wrong to talk so loud;

Silence, all, as you gather around,

Lest your noise should waken Jesus:

3. Softly to the little stable,

Softly for the moment come;

Look and see how charming is Jesus,

See how He smiles, Oh see how rosy!

Hush! hush! see how the Child is sleeping;

Hush! hush! see how He smiles in dreams.

You might recognize the tune for our next Christmas carol -- it shares its melody with the traditional English song "Greensleeves." Learn the history of "What Child is This?" on the following page.