'We Three Kings of Orient Are' 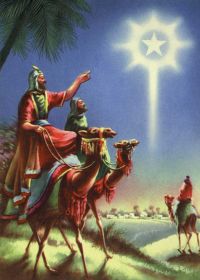 John Henry Hopkins, Jr., was instrumental in organizing an elaborate holiday pageant for the students of the General Theological Seminary in New York City in 1857. Hopkins, the seminary's music director, wrote and staged the pageant, which included his upbeat composition "We Three Kings of Orient Are."

This piece depicts the journeys of the three wise men, who traveled from separate parts of the globe to pay homage at the crib of Jesus in Bethlehem. Hopkins' words and music elevated Melchior, Caspar, and Balthazar -- following a fabled star and carrying gifts of gold, frankincense, and myrrh -- to new musical heights.

"We Three Kings of Orient Are" Lyrics

1. We three Kings of Orient are

Field and fountain, moor and mountain,

Guide us to thy perfect light.

2. Born a King on Bethlehem's plain,

Gold I bring to crown Him again,

Over us all to reign.

3. Frankincense to offer have I;

Incense owns a deity nigh.

Prayer and praising, all men raising,

Worship Him, God most high.

4. Myrrh is mine, its bitter perfume

Breathes a life of gathering gloom,

Sealed in the stone cold tomb.

King and God and sacrifice,

Earth to the heav'ns replies.

Christmas sheet music: "We Three Kings of Orient Are"

Our next Christmas song is a reverent carol about the messengers who first brought word of Jesus' birth. Learn about "Angels From the Realms of Glory" on the following page.