'While Shepherds Watched Their Flocks' 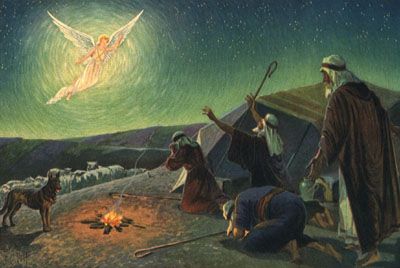 Advocates of a "literal interpretation" of the nativity story in church liturgy and hymns greeted "While Shepherds Watched Their Flocks" with enthusiasm. The reason was simple: The hymn closely replicates the Bible's description of events on the night of Jesus' birth.

It also helped that a distinguished group of musicians contributed to the hymn's creation. George Frideric Handel, composer of the famed oratorio Messiah, wrote the music. Years later, Richard Storrs Willis of "It Came Upon a Midnight Clear" fame infused Handel's old melody with text adapted from an even older work published by Nahum Tate and Nicholas Brody in 1696. And the result is timeless.

"While Shepherds Watched Their Flocks" Lyrics

1. While shepherds watched their flocks by night,

All seated on the ground,

The angel of the Lord came down,

And glory shone around,

And glory shone around.

Had seized their troubled minds;

To you and all mankind.

Is born of David's line

The Saviour, who is Christ the Lord

4. "The heav'nly babe you there shall find

All meanly wrapped in swathing bands,

And in a manger laid.

And to the earth be peace;

Good will henceforth from heav'n to men