'It Came Upon a Midnight Clear' 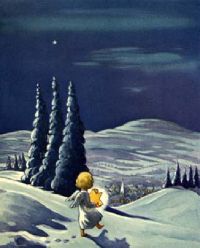 When Massachusetts Unitarian minister Edmund Hamilton Sears published his poem "It Came Upon a Midnight Clear" in a church magazine, his anonymity came to a resounding end. The words he wrote were instantly deemed profound by readers, and then set to music by Richard Storrs Willis the following year.

An unlikely collaborator, Willis was an editor and music critic for the New York Tribune. Fortuitously, he had also received extensive musical training in Europe, and his work with Sears produced a hymn that was deemed "one of the finest and most beautiful ever written," by American poet Oliver Wendell Holmes.

"It Came Upon a Midnight Clear" Lyrics

1. It came upon a midnight clear,

That glorious song of old,

From angels bending near the earth,

To touch their harps of gold.

"Peace on the earth, good will to men,

From Heaven's all gracious King."

The World in solemn stillness lay

To hear the angels sing

2. Still through the cloven skies they come,

And still their heav'nly music floats

O'er all the weary world.

Above its sad and lowly plains

They bend on hovering wing.

And ever o'er its Babel sounds

3. And ye beneath life's crushing load,

Whose forms are bending low,

Who toil along the climbing way

With painful steps and slow:

Come swiftly on the wing;

O rest beside the weary road,

And hear the angels sing.

4. For lo! the days are hastening on,

When, with the ever-circling years,

Comes round the age of gold.

When peace shall over all the earth

And the whole world give back the song

Which now the angels sing.

Christmas sheet music: "It Came Upon a Midnight Clear"

The next song offers a literal version of the Biblical account of Jesus' birth. You'll find "While Shepherds Watched Their Flocks" on the following page.