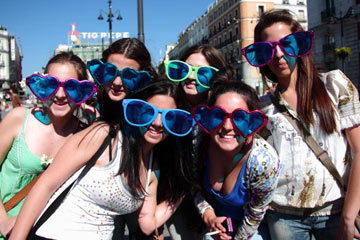 These young Gen Y women live life in the moment while enjoying their vacation in Madrid, Spain. They have fun looking goofy in oversized sunglasses, as long as all their friends look goofy, as well.
Eyes Wide Open/Getty Images News

They have hundreds of friends who are part of their online social networks, yet they deeply value family connections. They're often considered egotistical and brash, yet they're eager to learn and contribute. They want to make a lot of money, but they also believe in supporting nonprofit causes. They'll pay high prices for brands, but are also aware of the value of a good 401k plan.

The members of Generation Y, perhaps like all the generations to come before them, are a mosaic of traits that often seem incompatible. Perhaps chief among these is their unceasing optimism despite the fact that they grew up at a time when students were gunning down other students and terrorists were crashing planes into buildings. But it seems that instead of making them fearful and introverted, this has imbued Gen Y'ers with a marked positivity. This seems to come from the philosophy that practically anything can happen in life, so you should enjoy the moment while you can.

Not only have global events shaped their outlook, so have personal moments.

As they watched their parents divorce and friends come out of the closet as gay, Gen Y has become one of the generations that's most open to change of any that came before -- in fact, 93 percent approve of interracial dating relationships [source: Pew].

Yet despite their liberal leanings, the members of Generation Y tend to be much bigger conformists than the more radical, individualistic X'ers that came before them. They want to have an impact on the world, but they're happy to do so wearing the same "cool" jeans and sneakers as the rest of their friends.

Next: how Generation Y fits -- or doesn't -- in today's workplace.