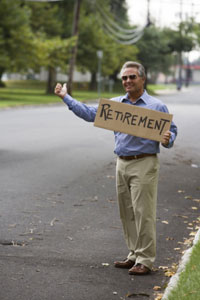 What will retirement look like for the baby boom generation?
Comstock Images/Comstock/Thinkstock

On Jan. 1, 2011, the first baby boomers began turning 65. For the next 19 years, nearly 10,000 boomers will reach that milestone every single day [source: Barry]. Boomers aren't going gently into that good night, however. Instead, they are, as Dan Barry says in The New York Times, "redefining what it means to be older." For one thing, they aren't retiring from the workforce at 65 the way their parents did. For another, exercise, healthy eating and preventative medicine make them the healthiest bunch of fledgling retirees the world has ever seen. They don't look old, and they don't act old. For baby boomers, 60 is the new 40 and "Grandma" is "Glam-Ma" [source: Zissu].

Not everything is coming up roses for boomers, however. In 2008, a Centers for Disease Control and Prevention (CDC) study on depression showed a nearly 20 percent increase in suicide rates for adults aged 45 to 54. For women in this age group, the rate increase jumps to 31 percent [source: Clark]. Researchers are investigating the increased used of prescription drugs as a possible cause. Another hypothesis is that boomers simply haven't lived up to the lofty aspirations of their youth. Boomers are also ill-prepared financially for retirement compared to their predecessors. Whether because of poor planning or because their best-laid plans were derailed by inflation in the '80s, the dot-com bust of the '90s and the recession of the '00s, many boomers are approaching retirement age without a significant nest egg.

It would be a mistake, however, to assume that they're approaching the end of life with a fizzle. Countering the news about increased suicide rates for baby boomers are the results of a recent Gallup poll, which show a marked increase in overall happiness starting around age 50 [source: Cohen]. With a generation as large as that of the boomers, it is completely plausible that their moods might range from happy to despairing, just as they themselves span the gamut between liberal revolutionary and staunch conservative.

One thing's for sure: As boomers retire and begin to affect the resources of entitlement programs like Social Security and Medicare, they are once again forcing a national conversation on public policy. Who knows? Maybe the debate will spark some of that old ingenuity, and the boomers will come up with a novel way around or through the question.

Still curious about this famous (and sometimes infamous) generation? Head over to the next page for a wealth of baby boomer-related content.