Tips for Hosting a Tea Ceremony 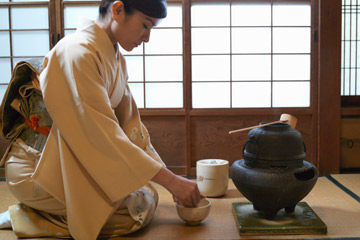 Sen no Rikyu, the man who so influenced the traditional tea ceremony, once offered seven rules for hosts of the ceremony:

If you'd like to host a tea ceremony, you should consider Sen no Rikyu's rules as well as his belief that they are deceptively simple. However, even if you fail in fulfilling all of the rules, your tea ceremony can be successful so long as you remain, at all times, conscious of these guidelines. The tea ceremony is meant to be a time-out from the world, one in which both hosts and guests can focus solely on small tasks and seek enlightenment and peace in their completion. In holding a tea ceremony, you should be mindful of all the decisions you make and actions you take. Don't pick up a ladle without being aware of what you're doing and concentrating on only that; remember that tea ceremonies are meant to have a sense of ichgio ichie, or one time, one meeting, so allow yourself to be fully present during this precious time. By finding beauty in the imperfect and in the mundane, you will come closer to fulfilling Sen no Rikyu's rules.

Many people study for decades in order to host a tea ceremony, so if you'd like to host one, you would probably find it beneficial to spend some additional time reading about the subject; you can get started with the links and articles below.