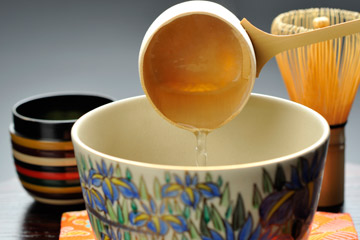 In the first few centuries that tea ceremonies were practiced in Japan, the participants used tea sets and utensils from China; after all, that's where the practice of serving tea originated. When tea ceremonies were the favored activity of the nobility, many people sought out expensive pieces from China. Showing off these extravagant tea sets became one of the main reasons for hosting a tea ceremony, and guests would spend hours looking at the fancy pieces. Many of these extraordinary pieces are now in museums.

One of Sen no Rikyu's influences on the practice of tea was doing away with these foreign and elaborate tea sets. Rikyu preferred very simple and rustic pieces from Japan, and if they had some kind of flaw, then so much the better -- trying to see beauty in the simple and the imperfect was one of Rikyu's goals throughout his work with the tea ceremony. Today there are many craftsmen in Japan that have studied the kind of ceremony utensils that Rikyu used, and people can visit their studios to examine the process of creating ceramic bowls.

Hosting a tea ceremony requires an immense amount of utensils and tools, and there's no shortage of craftsmen and manufacturers who provide the equipment. Collectors could probably spend the rest of their lives acquiring tea sets without ever lacking for something to buy. But for the purposes of this article, we'll cover just a few of the basics that are necessary for a tea ceremony. Depending on the season, hosts need a ro or a furo; a ro is a sunken hearth that is used in the winter, and a furo is a brazier, or a pan that is used in the summer months on an open fire. The ro and the furo provide the heat for boiling the water for the tea.

The kama, or kettle, would be placed atop the ro or furo, full of water from the mizusashi, or water jug. As the water heats, the ceremony host would use additional water to wash the tea bowl, called a chawan. The host would then take the green tea from the usuki, the tea container, using a chashaku, or tea scoop. The host adds the powdered tea to the chawan, and then adds the boiling water with the hishaku, or ladle. Then, the host would take the chasen, a bamboo whisk, to stir the tea, which he would then present to the guests. Throughout the ceremony, several types of napkins and cleaning cloths would also be used.

Those are the main parts of the tea set that would be required to host a tea ceremony. On the next page, we'll consider some other information you need to know before hosting such an event.