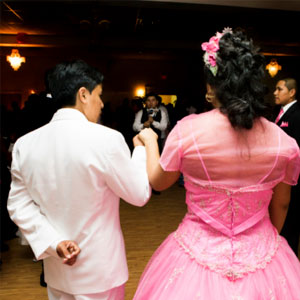 One of the final rituals of a quinceañera is the changing of the quince girl’s shoes. After the eating, drinking and dancing, the quince girl’s father will remove the flat-soled slippers his daughter wore to the party and replace them with a pair of heels. Thus, the 15-year-old who sashayed into the quinceañera as a girl will stride out and back home as a young woman. And as we’ll learn on the next page, this highly stylized rite of passage isn’t a recent invention, but rather a cultural homage to coming out ceremonies orchestrated by Aztec high priests in the early 1500s [source: Alcarez].