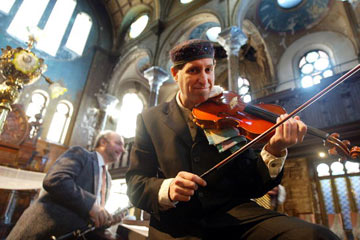 Throughout history, weddings have been among the most important ceremonies in Jewish culture. Consequently, the majority of klezmer is dance music, with specific dances corresponding to different types of songs in the klezmer repertoire.
Mario Tama/Getty Images

Klezmer music is the traditional music of Ashkenazi Jews, or Jews of Eastern European descent. Although the music was born in Eastern Europe, its roots can be traced back to the folk music, troubadour songs and church music of Central and Western Europe. Music was one of the few professions (along with money lending and trade) that Jews were allowed to practice in Medieval Europe, so in most large towns and cities, professional bands of Jewish musicians formed. As early as the 14th century, European Jews began migrating east, fleeing persecution and inquisition in an increasingly intolerant continent, and bringing their music with them.

Throughout history, weddings have been among the most important ceremonies in Jewish culture. From Biblical times through the modern era, Jews have faced persecution, inquisition and other hardships, and weddings provided an opportunity to celebrate life and love, and everyone was invited. Consequently, the majority of klezmer is dance music, with specific dances corresponding to different types of songs in the klezmer repertoire. But klezmer isn't merely up-tempo, feel-good dance music; it can also include slower melodies that aren't intended for dance.

Klezmer has always been heavily influenced by other styles of traditional and popular music, giving it room to grow. The instruments have changed with the times, as have the melodies. In the 18th and 19th centuries, klezmorim were traveling musicians who would swap and learn songs from other non-Jewish musicians, ultimately resulting in the highly eclectic sound that we now identify as klezmer. Over the past half century, klezmer has experienced a revival in the United States and elsewhere, as American Jews have become interested in their cultural heritage. Because of that revival, klezmer survives today, and continues to be one of the most interesting types of folk music in the world.

Klezmer is one of those "you-know-it-when-you-hear-it" music genres that has a nostalgic, Old World sound. The music that we identify as klezmer today harkens back to the Jewish music played in Eastern Europe in the 19th century. The rhythms, melodies and even the selection of instruments give klezmer music a distinctive sound. It is a very eclectic style of music that has changed and evolved over the centuries, as Jews have dispersed and spread all over the world, and it has always been heavily influenced by other types of folk music that were popular in Europe, the Balkans and more recently, the United States.

Because klezmer borrows so much from other styles of music, one way to identify klezmer is by the types of instruments that are used -- as well as those that aren't. Many klezmer purists argue that one of its distinguishing characteristics is that the music doesn't feature any drums. However, today many contemporary klezmer ensembles do employ drums [Academy BJE].

In Europe, the cimbalom -- a hammered-dulcimer instrument in a trapezoidal box -- was widely used in early klezmer, dating back to the Middle Ages. Later, the violin served as the lead instrument in traditional klezmer, and it continues to be used in many klezmer revival groups. Today, the clarinet is considered to be essential to klezmer music, but it wasn't until the mid- and late-19th century that the clarinet started to take over as the lead instrument. Later in 19th century, the accordion also joined the act, as did brass instruments like the tuba, trombone and saxophone [source: Rogovoy].

Beginning in the late 1800s, large numbers of Eastern European Jews immigrated to the United States to flee political upheaval. There, klezmorim adopted the sounds of American popular music, incorporating new instruments and sounds into the klezmer repertoire.

In Yiddish, the word "klezmer" means "musician," and the plural is "klezmorim," or "musicians." Until recently, there was no Yiddish term for klezmer music; it was simply music [source: Slobin].

The History of Klezmer

The word "klezmer," which has its roots in the Middle Ages, actually comes from two Hebrew words: "kley" (vessel or tools) and "zmer" (melody). Originally, the word referred to a musical instrument, but it was later broadened to mean Jewish folk musician [source: Strom]. It wasn't until the 19th century that the term became widely used to refer to Jewish folk music.

Since biblical times, both sacred and secular music played an important role in Jewish culture, but when the Jews were dispersed throughout the world in A.D. 70, rabbis banned all instrumental music, deeming it "profane." It wasn't until the 17th century that attitudes towards music began to loosen [source: Strom].

By the late 1700s, large numbers of European Jews migrated east, settling in a designated region known as the Pale of Settlement that now includes parts of Poland, Ukraine and Lithuania. Klezmorim became a vital part of shtetl culture in the Pale, providing music for weddings and private parties, but they were at the fringes of society, occupying a similar cultural role as Gypsies [source: Rogovoy].

As European countries experienced a series of political upheavals in the late 19th century, many Jews, facing increasing intolerance, made the long trip to the United States. From 1880 to 1924, approximately 2.5 million Jewish immigrants arrived in the U.S., bringing with them traditional music. In the new setting, klezmer began a rapid transformation from folk to popular music, as klezmorim brought their talents to movie theaters, vaudeville houses and recording studios.

However, in the mid 1920s, the U.S. government passed the Johnson-Reed Act, severely limiting the number of immigrants from Eastern Europe. With fewer new Jewish immigrants looking to wax nostalgic about life in the Old World with music, klezmer's popularity began to decline. Then, sparked by ethnic pride and a desire among American Jews to explore their roots, a klezmer revival began in the 1970s and '80s, which continues to this day.

The King of Klezmer Clarinet

What are the Different Types of Klezmer Songs?

At its core, klezmer has always been wedding music. Weddings were an enormously important part of life in Eastern European Jewish communities. Life was difficult in the Pale, and weddings gave people a reason to celebrate, and they tended to be large affairs. A wedding wasn't a wedding without klezmer music, which provided a frenetic and happy soundtrack to the party. But more than simply providing pleasant background music, most klezmer music was intended for dancing. Ritualistic dances were a central part of traditional Jewish weddings in Eastern Europe, and klezmer rhythms provided the beat and melody for those dances.

In the core repertoire, the most common type of song was the freylekhs, a generally happy dance song that used melodies from Jewish religious music. Freylekhs songs include the sher, or scissors dance, which is a type of mid-tempo Russian-style square dance; the khosidl, which is a slower dance; and the terkisher, which is similar to the tango. The klezmer core repertoire also included non-dance ritual songs, like holiday songs. The non-Jewish songs that would make up the rest of the klezmer repertoire included a wide variety of non-religious songs that a klezmer musician might have learned in his travels, including Romanian, Polish and Ukrainian dance songs, as well as slower songs of lamentation.

Klezmer was never limited to traditional or regional music, though. In the same way that a DJ might mix top 40 hits with more traditional music at a contemporary wedding, klezmorim always included non-Jewish popular music of the day in their repertoire. Popular Western European dances, like the polka and the waltz, were commonly played by klezmer musicians [source: Rogovoy]. 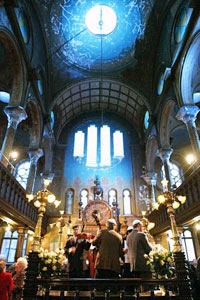