What is the history of the wedding garter tradition?

Browse the article What is the history of the wedding garter tradition? 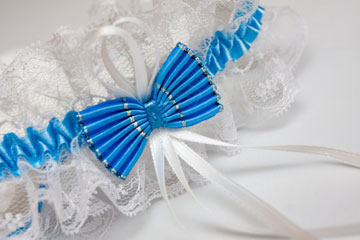 Many brides like to choose a garter that incorporates "something blue" in order to stick to the popular rhyme.
Hemera/Thinkstock

It's fair to say that in other places, in other times, weddings could be rather crazed affairs, and the garter toss served to make things a little less crazy.

You may have seen those scenes in period movies where the winsome couple stands humiliated in the background while the groom's father proudly displays their post-nuptial bedclothes to a large party of guests. There's no question that this sort of thing went on, particularly in marriages that were important to a family's succession. But there were worse things that went on, too.

It's fair to say that, for the bride, this wasn't a whole lot of fun.

And if the bride happened to be in France, she could look forward to this practice after being rushed at the altar by the wedding guests, who were hoping to snag a piece of her dress for good luck. Another strange stocking story involves guests following the couple into the bridal chamber, waiting for them to undress, stealing their stockings and throwing them at the couple repeatedly until they hit either the groom or the bride on the head. This wedding-chamber version of horseshoes theoretically imparted some kind of luck to the players.

It's interesting to see that in these cases, the bride, who was so often the object of protective measures before her wedding, became subject to attack afterward. All those things that are meant to cast off evil spirits -- the veil, the procession, the identically dressed bridesmaids -- seemed to go out the window when the wedding was over.

To the bride, the most evil of spirits turned out to be the wedding guests themselves. Professors of women's studies might postulate that these practices reflect the loss of power of a medieval woman at the moment of her marriage -- that as the keeper of a new hearth, she has become, in effect, community property.

In any event, somewhere, at some time, a bride who retained at least little of her power suggested that her groom just toss the guests a garter. Other grooms were quick to comply.

For more great tradition articles, check out the links on the next page.