Browse the article How the Ethiopian Coffee Ceremony Works 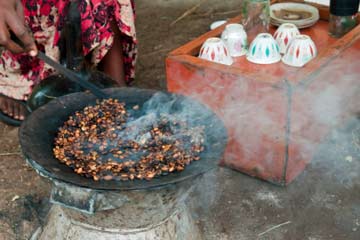 The Ethiopian coffee ceremony is much more than sipping a good cup of joe. It's an important cultural ritual that's been passed from generation to generation in the country believed to be the birthplace of coffee. And we can thank a few lucky goats for the discovery.

Ethiopian folklore contends that coffee beans (which are actually the seeds of cherrylike fruits) were discovered around 800 A.D. by a goatherder's charges as they grazed on the red fruit of a coffee plant. When the goats began frolicking, the herder rushed a handful of the mysterious fruit to nearby monks, who promptly destroyed the seeds by tossing them into a fire -- something they were wont to do with potentially sinful items.

However, the roasted seeds exhibited two miraculously redeeming qualities: a delectable aroma and, when crushed and steeped in hot water, a distinctive drink with an invigorating kick. The brew buzzed the monks' daily devotions, allowing them to continue their prayer long into the night [source: National Coffee Association]. And as coffee's popularity spread throughout Ethiopia and eventually the world, it inspired a devotion all its own.

Today, an estimated 12 million Ethiopians grow and harvest coffee beans in what has become the nation's major cash crop [source: Doyle]. During the 2010/2011 fiscal year, coffee accounted for the lion's share of the country's exports, earning a record $841.6 million [source: Masho]. Ethiopia's varying terrain fosters different types of coffee plants, each producing seeds with a distinctively different flavor. For example, the coffee beans the monks used were most likely a robust Arabica strain that grew wild in the forest underbrush.

Just as they did over a thousand of years ago, Ethiopians still consider the coffee ceremony a crucial tenet of friendship and respect -- so important, in fact, that they'll perform the hours-long ceremony for any visitor, no matter the time of day. It all starts with an elaborate ritual to prepare the coffee seeds. 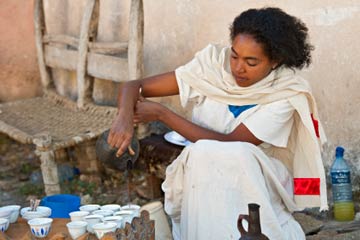 A coffee ceremony hostess in Axum, Ethiopia pours a round of coffee.
©iStockphoto.com/guenterguni

Every guest invited to a coffee ceremony has been extended the hand of friendship and welcomed into a circle that takes on familial overtones. As a sign of appreciation, it's customary to present the hostess with a simple gift, such as sugar or incense.

Although everyone attends, the honor of conducting an Ethiopian coffee ceremony always falls to a young woman. This adept hostess wears a traditional, ankle-length white cotton dress embroidered at its borders with colorful thread [source: Machacek]. Her practiced movements elevate the relatively simple act of roasting, grinding, brewing and pouring coffee to an art form. Don't be fooled into thinking it's anything like the coffee breaks you orchestrate at home: Many Ethiopian children witness a coffee ceremony nearly every day -- up to three times a day in traditional households -- and girls are encouraged to learn the requisite skills over time.

Often, a child's initial hands-on assignment will be to carefully carry a cup of coffee to each guest. Sometimes, the child will offer the first cup to the guest of honor. Traditionally, however, the first cup will go to the oldest guest; it's one of the many ways that Ethiopian culture connects and respects the generations. The coffee ceremony also provides a vehicle to share news, exchange gossip and debate local politics -- each ceremony can take anywhere from half an hour to a few hours to complete [source: WorldHum.com].

Although the strong coffee is served black, guests usually sweeten each cupful with several teaspoons of sugar before drinking. If the coffee ceremony takes place in a country home, the coffee may be served with salt instead of sugar. Either way, guests lavish praise on the preparer as they drink each cup.

There is one thing, however, that guests must not do: refuse to drink the coffee. This sounds simple enough, right? The coffee service, like the preparation, is rife with symbolism and ceremony. Three rounds of coffee are served, known successively as abol, tona and baraka -- which some tales say were the names of the three goats that got the original caffeine buzz thousands of years ago. The three cups symbolize an elevation that is supposed to bring the drinker increasingly closer to transformation. Literally, baraka means "to be blessed." On the next page, learn about the steps that preclude that blessing. 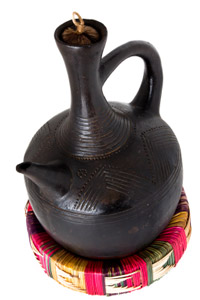 Before an Ethiopian coffee ceremony gets underway, the hostess burns frankincense or other incense to clear the air of bad spirits [source: WorldHum.com]. Then, she offers her guests traditional snack foods, which may include popcorn, peanuts or cooked barley [source: EveryCulture.com].

In full view of the guests, the ceremony begins. Raw coffee seeds are washed to remove their husks and other debris, and then the cleaned seeds are placed in a long-handled pan and held above a small fire contained in a stone oven. The beans are shaken rhythmically in the pan to prevent scorching. As the seeds heat, they darken, become shiny with their own oils and begin to make a popping sound. At this point, the hostess removes the coffee beans from the heat and waves the pan to create an aromatic breeze for the guests to appreciate [source: Griffin].

The roast coffee beans are ground by hand using a mukecha (moo-keh-cha) bowl and a zenezena stick, which act as a mortar and pestle. The ground coffee is then transferred to a jebena, a handcrafted clay pitcher with a bulbous flat bottom, long narrow neck, handle and straw lid. The jebena is filled with water and placed on the fire, and its contents are brought to boil.

The brewed coffee, called bunna (boo-na), is poured from the jebena into a decanter and cooled. It's then poured into the jebena again and brought to a boil, and then the process is repeated again. After this triplicate brewing process, a filter -- often made of horsehair -- is placed in the jebena's spout to separate the grounds when the coffee is poured. And poured it is: Holding the jebena from about a foot above the neat rows of delicate china cups known as cini (see-nee), the hostess streams the hot coffee with skill [source: WorldHum.com].

Although a few drops may splash or overflow, it's all part of the ritual. The cups are arranged on a tray atop a bed of scented grass that symbolizes abundance [source: Ethiopian Restaurant]. With such an attitude of plenty, it matters little to spare a few drops -- or a few hours sipping coffee with friends.