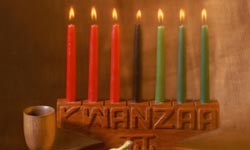 The black candle in the center is lit by itself on the first night of Kwanzaa and together with a red or green candle each night thereafter.
Stockbyte/Thinkstock

Kwanzaa, a seven-day holiday that celebrates African-American heritage, is the brainchild of Dr. Maulana Karenga, a professor of Africana Studies at California State University Long Beach. Karenga created Kwanzaa as a way to help African-Americans remember their roots and also to foster unity during a time of incredible racial strife. It's been observed from Dec. 26 to Jan. 1 every year since 1966.

Karenga, a controversial figure in the black power movement, openly opposed Christian beliefs and originally declared that Kwanzaa should be an anti-Christmas of sorts. By the late-1990s, though, he had backed off, saying "Kwanzaa was not created to give people an alternative to their own religion or religious holiday." Today, about one in seven African-Americans celebrates Kwanzaa, and many of them do it in addition to Christmas [sources: Raskin, Scholer].

The name Kwanzaa is derived from matunda ya kwanza, a Swahili phrase for "first fruits," is based on traditional African harvest festivals, combining customs from a number of different cultures. Each of the seven days represents one of the seven principles of Kwanzaa, or nguzo saba. There are also seven symbols of Kwanzaa, which celebrants display prominently in their homes throughout the holiday.

The colors of Kwanzaa are red, black and green -- the colors of the Pan-African flag, which symbolizes unity among African people all over the world. Black represents the people, red their blood and green the earth and the future.

Kwanzaa is, of course, a festive time; it has all the feasting and celebrating you'd expect from a weeklong holiday, but it's also an occasion for reflection, conversation, contemplation and camaraderie. And although it's a relatively young holiday, it has its fair share of very specific, detailed traditions. So, if you don't know your vibunzi from your mishumaa saba, this is a good place to start!

We'll start off with the foundation of Kwanzaa: the seven principles.

Each day of Kwanzaa represents one of the seven principles, or nguzo saba. Taken together, the seven principles make up kawaida, a Swahili term for tradition and reason. Kwanzaa celebrants are encouraged to discuss, meditate on and dedicate themselves to a different concept every day:

During the evening candlelighting (which we'll talk about in more detail on the next page), everyone in the group explains what the day's principles means to them and how they tried to apply it that day. There might be an activity based on the principle, like a project, a musical performance or a poetry reading.

There's a specific greeting for each day, too. The answer to the question "Habari gani?" (Swahili for "what's the news?") is always the name of that day's principle. So, for example, on the third day the response would be "ujima."

When Kwanzaa started, the intention was -- as a part of the kujichagulia principle of self-determination -- to keep it separate from non-African holidays. But over the years, more and more African-American families have begun celebrating Kwanzaa along with Christmas and New Year's.

Why all the Swahili?

There are hundreds of African languages, but Dr. Karenga chose to use Swahili for Kwanzaa terms because it's the most widely spoken language on the continent. 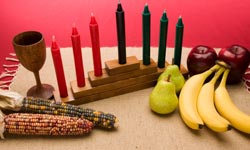 The size and shape of Kwanzaa candles don't matter, but the order of the colors does.
Liquid Library/Thinkstock

Along with the seven principles of Kwanzaa come the seven symbols. This grouping of symbolic items is placed on a mat in a central area of the home and is the focal point of any Kwanzaa celebration:

There are two supplemental Kwanzaa symbols -- the Pan-African flag and a poster of the seven principles -- that can be displayed in the house but not necessarily on the mkeka.

There's plenty of food to go around on any given night of Kwanzaa, of course, but the main eating event -- and the most significant Kwanzaa celebration overall -- is the karamu feast, usually held on Dec. 31. The principle for the sixth day of Kwanzaa is kuumba (creativity), so it stands to reason that the karamu is a showcase for creativity of all kinds -- artistic, musical and poetic, as well as culinary.

Karamu feasts vary in formality, but a by-the-book event starts off with a welcoming statement (kukaribisha) and a music, dance or poetry performance. Then comes the kukumbuka, reflections offered by a man, woman and child. After that is a "reassessment and recommitment" ritual, a talk by a guest lecturer and then rejoicing (kushangilia).

The next step, the tambiko ceremony, is the central ritual of the Karamu feast. Everyone passes and drinks a libation (tambiko) from the kikombe cha umoja (unity cup). Then the oldest person in the party honors the ancestors by reciting the tamshi la tambiko (libation statement) and pouring some of the drink -- usually water, juice or wine -- to the four winds before asking for a blessing. He then pours some on the ground, to a resounding "amen" from the group. The host or hostess then takes a sip and hands it back to the elder. Then there's a drum performance (ngoma), and it's time to eat!

As part of his original intent to separate Kwanzaa from Americanized events, Dr. Karenga wanted the holiday to be overflowing with traditional African cooking. But as Kwanzaa became more mainstream, African-American dishes inevitably started creeping into the mix. And there are people of African descent all over the world, so the food isn't limited to the African continent. Any given karamu, then, could include Ethiopian, Kenyan and South African fare, along with Caribbean cuisine and Southern comfort food like mac and cheese, collard greens, fried chicken and sweet potato pie.

Ngoma is the Swahili word for drum, and the term is also used to indicate dancing and social gatherings in Swahili-speaking areas.

Kwanzaa celebrants spend New Year's Day as so many people do around the world -- with a day of intense focus on meditation, self-analysis and renewal. Jan. 1 is the final day of Kwanzaa, known as the Day of Meditation (siku ya taamuli), and the principle for the day is imani (faith). Dr. Karenga noted that, in the tradition of the Akan people of Ghana and the Ivory Coast, Jan. 1 can also be called a Day of Remembrance or Day of Assessment.

As in the karamu feast the night before, there is an aspect of ancestor tribute to the Day of Meditation. Celebrants are primarily called to reflect on themselves, but a central concept of Kwanzaa is that you cannot know yourself without knowing where you came from. To understand the self, you have to pay homage to your heritage and understand your role in your community.

The main task for the Day of Meditation is to contemplate the three kawaida (tradition and reason) questions and answer them honestly:

The Odu Ifa meditation is recited as an aid to this self-reflection and contemplation:Let us not engage the world hurriedly. Let us not grasp at the rope of wealth impatiently. That which should be treated with mature judgment, Let us not deal with in a state of anger. When we arrive at a cool place, Let us rest fully; Let us give continuous attention to the future; and let us give deep consideration to the consequences of things. And this because of our (eventual) passing [source: Official Kwanzaa Web Site].

And with the end of the Day of Meditation comes the end of Kwanzaa. The hope is that the renewed sense of self, heritage and community will last throughout the coming year. 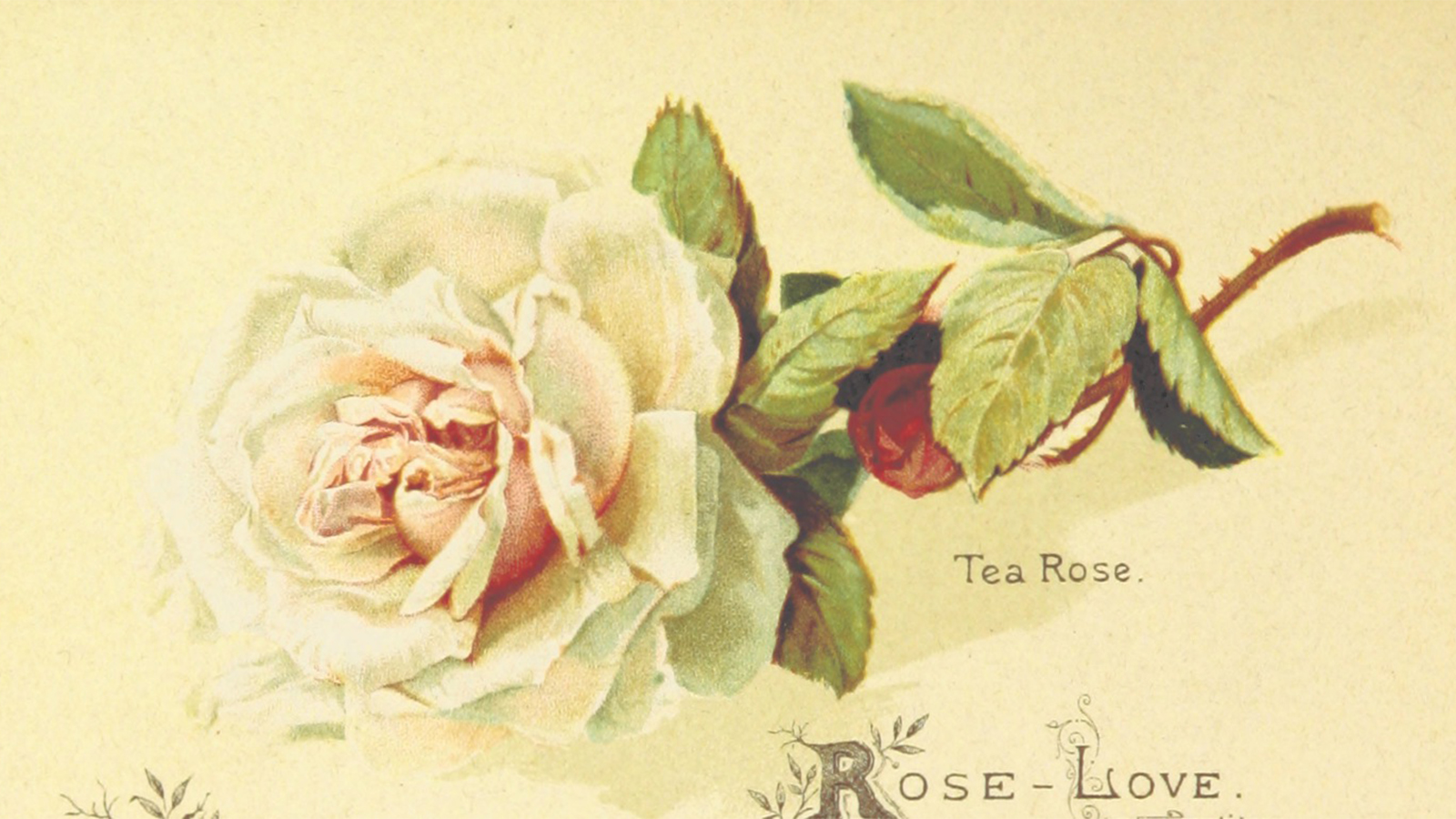