by Rebecca Fairley Raney
Prev NEXT
3 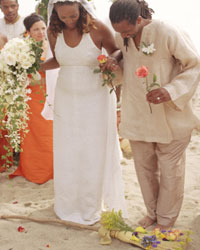 Jumping the broom originated during the time of slavery as a symbolic way of leaping into a new life.
Hill Street Studios/Brand X Pictures/Getty Images

While trendy African-American couples sometimes incorporate this ritual into modern ceremonies, their great-great-grandparents might not have approved.

The practice of jumping the broom started in slave times, when it was actually illegal for slaves to marry. Nonetheless, the people on the plantations sought to form bonds that were acknowledged by the community, so they jumped the broom together in lieu of a legal wedding.

Historians note that freed slaves taught their children to disdain the practice, because to them, it was a symbol of bondage. However, the poignant scene in Alex Haley's "Roots," in which Kunta Kinte jumped the broom on the plantation with his bride, led to a revival of the custom. In that scene, the captive from Africa is not accepting his captivity, but he is acknowledging a powerful bond with another person despite being trapped in a life he didn't choose.

Despite their ancestors' distaste for the practice, some modern couples incorporate jumping the broom into their ceremonies as a connection to a painful but significant part of their heritage.