by Rebecca Fairley Raney
Prev NEXT
5 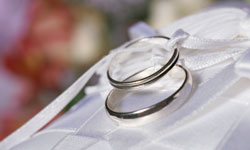 The wedding rings symbolize the binding of the bride to the groom -- although not literally, as the tradition once went.
Stockbyte/Thinkstock

Whether this is a legitimate long-held tradition or not is subject to some debate, because the whole category has been corrupted by commerce.

Some sources report that the Romans and Egyptians recorded the use of wedding rings. There's also chatter about the ring being a less restrictive symbol of the hand and foot bindings of a captured bride. (As for abduction -- that's a real tradition.) A pope in the 12th century decreed that weddings would be held in church and that the brides were to receive rings. He also decreed that the time between engagement and marriage should be lengthened, which boosted interest in engagement rings.

But those rings didn't have diamonds.

There's no dispute that DeBeers singlehandedly created the market for the diamond engagement ring with a simple sentiment in a 20th-century ad campaign: A Diamond is Forever.

As it turned out, the slogan might outlast the product, as socially conscious brides steer away from the products of the war-torn diamond industry.