by Stefani Newman
Prev NEXT
1 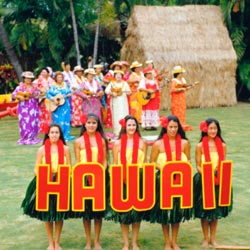 The modern luau originated in 1819 by King Kamehameha II, all the food was eaten by hand while seated on the ground [source: Hawaiian Luau.
AbleStock.com/Thinkstock

What could be more quintessentially tropical than hosting a Hawaiian luau? Even if you've never been to Hawaii, you've probably seen one on TV. Picture yourself dancing and dining at sunset with tons of food and drinks and dancing to Hawaiian music. Break out the grass skirts, leis, ukuleles and Don Ho records because a luau is the ultimate tropical party.

For such a recognizable event, the history of the luau isn't very well known. In ancient Hawaii, men and women separated while dining, and women were forbidden to eat certain foods. In 1819, however, King Kamehameha II abolished the traditional practice. As a symbolic gesture, the king hosted a feast and ate with both sexes. This ended any notion of eating together as being taboo. The main meal, a dish of taro root and chicken cooked in coconut milk, was called "luau" -- hence the name luau was born [source: Hawaiian Luau].

These days, luaus don't vary much in food served and entertainment provided, and they've become as ubiquitous in Hawaii as backyard barbecues are in the rest of the U.S. Poi, the Hawaiian staple of mashed taro root, is served with sweet potatoes and platters of meat and fish. Flowers are abundantly spread throughout the event area, and dancers provide endless entertainment. For you're at-home luau, you can find decorations like hula skirts and leis at party supply stores. Download some surf music and ukulele songs, and you'll have a party vibe that's all Hawaiian.

If you're really adventurous, pit-roasting a pig can also be a part of your luau. Traditional luaus feature a kalua pig to be roasted in an imu, a traditional underground oven. An imu is prepared by digging a large pit about 2 to 4 feet deep. The imu cooks via a steaming process, so twigs, wood and vegetation such as banana or palm leaves are layered in the pit. Next, your food is placed in the pit, and more leaves are used to cover it. Mats are laid over the leaves, and then a loose layer of soil is placed over everything to ensure no heat escapes [source: Labiste]. Roasting a whole pig outdoors takes a lot of time and preparation, so if it's freezing outside and you're buried in snow, wait for warmer (or less bone-chilling) weather to attempt this more primitive form of cooking. No utensils are used for eating at traditional luaus, but we'll leave the hands-free choice up to you.