by Melanie Radzicki McManus
Prev NEXT
6 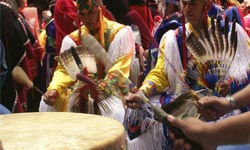 Drums used at powwows are large enough for several people to play together.
Bobbie DeHerrera/Newsmakers/Getty Images

Powwows are actually a relatively new ceremony among Native Americans. Rare before Europeans came to North America, this communal ritual sprang up around the mid-19th century, when tribes were being relocated by the U.S. government and began interacting with one another and initiating cultural exchanges [source: Suing].

While powwows differ among tribes, they all typically begin with a Grand Entry of the color guard and dancers, then a welcome speech. After that, various dance performances are held, such as the Men's and Women's Traditional Dance, the Grass Dance and the Jingle Dress dance. Often there are dance competitions, and prizes are awarded.

The man instrument used at powwows is the drum. Powwow drums are typically large, two-sided drums, which allow several people play each drum simultaneously. The songs tend to be rhythmically complex, with the singers using a slightly different tempo than the drumbeat.

Powwow drums are revered and are placed on a blanket or stand during the performance, then covered when not being used. Before a powwow, a smudge of tobacco is usually applied to the drums in a sunrise ceremony, and no one can use drugs or alcohol near them [source: Suing].

Most powwows are open to the public and are a wonderful way for non-Native Americans to experience a little of their culture.