by Melanie Radzicki McManus
Prev NEXT
9 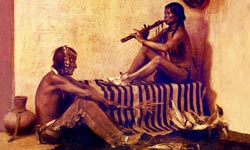 The Native American flute is considered one of the oldest musical instruments in the world, created after drums, rattles and whistles. Crafted over time from various materials including bone, bamboo and clay, plus numerous types of hardwoods and softwoods, American Indians eventually selected cedar as their favorite flute-making material. A softwood cedar flute, they felt, emits a more mellow tone [sources: Cedar Mesa, Wind Dancer Flutes].

Native American flutes have just two chambers -- which is quite unusual -- with a wall dividing the top and bottom chambers. Their length and the number of holes, varies depending on which tribe is creating them. All modern Native American flutes, however, are tuned to a specific pentatonic minor key and can only play notes in that key. If you want to play in another key, you'd use another flute.

Native Americans used flutes for everything from entertainment, prayer and healing to courtship, perhaps its most popular use. In fact, many flutes are called Love Flutes or Courting Flutes, and American Indians have numerous sacred stories as to how the Love Flute came to be used in courting.