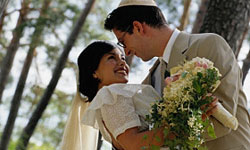 Many Jewish wedding traditions are thousands of years old and are as fun as they are historic.
Buccina Studios/Photodisc/Getty Images

Weddings are notoriously stressful. It doesn't matter what your religious background is; the anxiety over finding a dress, securing a venue, choosing a florist and figuring out the guests' seating chart is enough to make any couple wish they had eloped. Jewish wedding traditions, however, tend to keep betrothed lovers grounded and focused on the commitment they're about to make to each other and to God, not on the frivolities surrounding the ceremony itself. That's not to say, however, that Jewish nuptials aren't fun. It doesn't matter if you're a Hasidic Jew or your knowledge of Abraham begins and ends with Lincoln; the long-standing customs, traditions and gleeful celebrations at most Jewish weddings are sure to make even the most jaded guests smile.

Ever wanted to be queen for a day? Well, if you're a Jewish bride, you will be! Find out more on the next page.

Royalty for a Day

Most brides feel like queens when walking down the aisle, but Jewish brides (and grooms) are actually considered royalty on their wedding day. A Jewish wedding is a sacred event and is considered a personal Yom Kippur for the bride and groom, meaning it's a day for spiritual atonement and forgiveness. All the couple's previous individual sins are forgiven, as the vows they take at their wedding join their souls before God, so they're able to start a new life together unburdened by past transgressions [sources: Shulman, Housman]. On this special day, the bride and groom are truly righteous because all their sins have been forgiven. Jewish law mandates that the pair be treated as royalty and each be seen as a king and queen.

However, there's a catch. In many cultures, the bride and groom are prohibited from seeing each other the day before the wedding, but in Jewish tradition, the pair must avoid each other for a full week. So while the couple receives royal treatment on their big day, until the ceremony itself, the king and queen celebrate their roles separately [source: Jewish Wedding Network].

The bride receives her guests on a throne like chair, all of whom offer congratulations and encouragement. The groom's guests toast and sing to him in a nearby room. Passages from the Torah are also read during the groom's reception [source: Chabad].

The Hebrew words for bride (kallah) and groom (chossen or chatan) are used in Jewish ceremonies.

Caring for the Bride 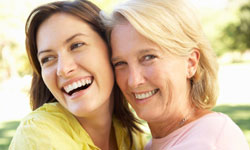 A special point is made for Jewish brides to know how much they're loved.
iStockphoto/Thinkstock

The Shabbat kallah is a celebration that's all about the bride. The Shabbat (Saturday) before her wedding, the bride's family, friends, loved ones and even members of the community throw her a party. No guys are allowed, though any girl who would like to attend can do so. In fact, at most Shabbat kallahs, it doesn't even matter if you know the bride or not; if you're female, you're not crashing the party [source: Gruen].

But the Shabbat kallah isn't just an excuse for Jewish girls to get down. It's a purposeful distraction for the bride just few days before the big day. Everyone is there to support her, ease her nerves and let her know that she is loved [source: Jewish Wedding Network]. It's a beautiful, emotional gathering that has helped countless Jewish brides get over their last minute jitters.

Like many religions, fasting is an important part of Jewish tradition, most notably on Yom Kippur. By depriving the body of food on this day, Jews demonstrate repentance for the sins of the past year, which are then wiped away by God. The bride and groom often fast on their wedding day, because, as mentioned earlier, all their previous individual sins are forgiven when they become man and wife. Luckily, the fasting only lasts from dawn until the conclusion of the ceremony, so the hungry couple is free to feast on anything they like at the reception [source: Shulman].

Besides food, many Jews forgo bathing, using body products such as makeup, deodorant and lotion, wearing leather shoes and sexual contact during Yom Kippur. Of course, exceptions are given whenever medically necessary. For example: Women who have recently given birth and children 9 and younger are forbidden to fast [source: Jewish Virtual Library].

Jewish weddings typically take place under a chuppah, which is an open canopy supported by four poles. It's the first roof the couple share, and the structure's lack of walls pays tribute to the open tent the biblical figures Abraham and Sarah shared. Their home was never closed to the community, and they greeted all their guests openly and hospitably [source: Jewish Wedding Network].

The ceremony begins with a family processional, after which the groom makes his way to the chuppah. In many ceremonies, the bride circles her future husband seven times before joining him, which symbolizes her building the walls of their new life together [source: Shulman].

Some Jewish sects forbid the bride and groom from wearing jewelry under the chuppah, as their marriage should be based on a love of the other person, not material possessions [source: Shulman].

The Veiling of the Bride 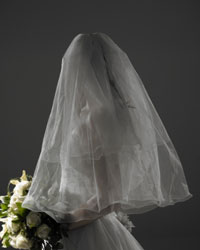 Many Jewish brides are beautiful, but the point of the ceremonies is the love the couples share, not the ladies' good looks.
Michael Blann/Riser/Getty Images

Many grooms remove their bride's veils, but Jewish grooms veil their brides! The veiling takes place during a ceremony called the badeken and is an important part of most Jewish weddings.

Every girl strives to look her best on her wedding day, and Jewish brides are no different. So why would the groom hide her face? The veil is placed because no matter how gorgeous the bride may look, beauty is fleeting, and it's the quality of a person's character and sprit that are important. By veiling his bride, the groom is also making a commitment to protect, clothe and provide for his wife [source: Shulman]. 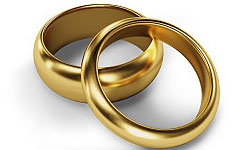 Although Jewish law doesn't require a couple to exchange rings (any object of value given from the groom to the bride will do), rings are both a historical and contemporary symbol of Jewish unions. Regardless if the pair is rich or poor, the ring should be simple. The groom is supposed to place a plain gold band without stones or ornamentation on his bride's finger. This symbolizes the idea that the marriage, like the ring, should be uncomplicated and beautiful. The moment the ring is placed on the bride's finger, the two are wed [source: Shulman].

It's not mandatory that the groom also receive a ring, but if he does, the bride must wait until after they have left the chuppah before she gives it to him. This is done to ensure that the marriage ceremony follows the guidelines set forth in the Torah [source: Shulman].

Seriously, It's Not a Shotgun Wedding

Even if the bride-to-be has been sporting a diamond ring for years, in many Jewish communities, the couple isn't truly engaged until a tena'im (a document detailing the conditions of the engagement) is signed. Breaking an engagement after it's signed is considered extremely dishonorable, so if a tena'im is used, it's almost always signed the day of the wedding [source: Jewish Wedding Network]. This means, of course, that the couple isn't technically engaged until their wedding day.

Tina'ims were first used in medieval times, when Jewish parents would arrange their children's marriages. These documents were contracts and contained the terms agreed upon by the families, including the wedding date, dowry and penalty fee for canceling the union [source: Diamant]. 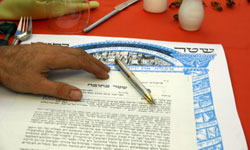 The signing of the Ketubah is one of the most important parts of most Jewish weddings.
Hemera/Thinkstock

Yes, the Ketubah is another contract, but unlike the Tina'im, this document represents the husband's vows to his wife. It provides a written promise from the groom (that's legally binding in some countries) to take care of his wife's emotional and physical needs, including providing clothing, food and other basic necessities. And these are not just empty words. To make sure the husband is living up to his promise, the wife must be allowed access to the document for the duration of the marriage. In fact, the Ketubah is so important that the marriage ceremony cannot take place until it's signed. It's often a work of art, ornately detailed with calligraphy and hand-painted images [sources: Shulman, Jewish Wedding Network]

After the groom places a ring on the finger of his bride, he stomps on a glass wrapped in a napkin or cloth. The glass can be anything from a Champagne cup to a light bulb, but besides being a fun and unique way to end the ceremony, breaking the glass is extremely symbolic. It echoes the destruction of the temple in Jerusalem and reminds the newlyweds and all the guests of the commandment in Psalms 137:6 to "set Jerusalem above my highest joy," even in the happiest of times [source: Shulman].

The Meaning of Mazel Tov!

Even if you're not Jewish, you've probably heard the expression "mazel tov" before. It's a blessing and congratulatory statement that essentially means good luck. It can be given at any time, but most non-Jews are familiar with its role in weddings. 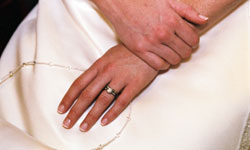 After the ceremony, the newlyweds finally have a few minutes alone in the yichud room.
Hemera/Thinkstock

After the ceremony, the couple is taken to a private yichud room for a few moments of quiet time. Yichud means "alone together" in Hebrew, and no one may disturb the pair while they're in this room. The newlyweds are allowed to break their fast during this time and rest after their busy (and often stressful) wedding day [source: Jewish Wedding Network].

A common misconception is that during their stay in the yichud room, the couple consummates their marriage, but that's largely inaccurate. We're sure it happens sometimes (we are talking about newlyweds, after all), but the purpose of the yichud is not overtly sexual. Traditionally, unmarried men and women were forbidden from spending time together alone, so this period marks the first opportunity for the couple to enjoy each other's private company. Therefore, it's a figurative, not literal, consummation. Yichud is one of the simplest traditions in Jewish weddings, but it's often the most remembered and cherished by the married couple.