The Roles of the Parents 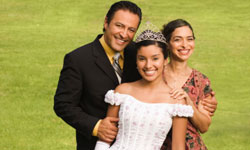 A quinceañea is just as exciting to the parents as it is to the girl.
Jupiterimages/Brand X Pictures/Getty Images

We’ve already mentioned one important role the parents have in the quinceañera celebration, which is the tradition of the father dancing the first dance with birthday girl. This special father-daughter dance represents her transition to womanhood and highlights the importance of the father as the first man in her life. But the parents also have other significant roles.

Another popular tradition is the changing of the shoes. In this ritual, one of the parents will take off the quinceañera’s flats and replace them with elegant heels. This will be the girl’s first pair of heels, representing her growth and maturity. Finally, the parents will give a toast to their daughter, often emphasizing her personal accomplishments and virtues [source: Kernecker].

And, of course, we can’t overlook one of the most important roles of the parents -- paying for the celebration. However, this often doesn’t fall completely on the parents’ shoulders. Traditionally, a quinceañera will be at least partially funded by others, as we’ll find out next.