by Debra Ronca
Prev NEXT
9 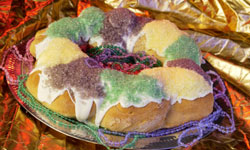 The lucky one who finds a plastic baby in his or her cake will host next year's party.
Jupiterimages/Liquidlibrary/Thinkstock

It's simply not Mardi Gras in New Orleans without King Cake. King Cake is typically eaten on Fat Tuesday, right before the beginning of Lent.

The first stories of King Cakes date back to pre-Christian, pagan times. According to legend, each year, one man was chosen to be "sacred king." This man would enjoy a kinglike existence for one year, at the end of which he was sacrificed -- in order for the community to receive a bountiful harvest. This lucky/unlucky man became "sacred king" by winding up with a particular slice of a cake. The cake had a coin or bean baked into it, and whoever ended up with the coin was the new king. A less murderous version of this cake concept later became a part of the Christmas celebration, during Epiphany. And it made its way into the Mardi Gras celebration via French settlers in Louisiana [source: Sterling].

King Cake isn't just any old cake. It's a cake/bread hybrid, frosted on top with a baby baked inside. It also … Wait, a baby? Yep. Inside each King Cake is a tiny, plastic baby. Some say the baby represents the baby Jesus. Others say the plastic baby tradition began when a New Orleans bakery wound up with a huge shipment of tiny plastic babies from Hong Kong. Either way, if you find the baby in your slice of cake, don't despair. You won't be put to death. You'll simply be asked to host the next year's Fat Tuesday party or bring the King Cake.