by Sara Elliott
Prev NEXT
2 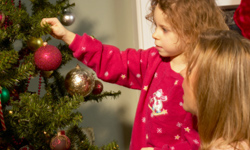 A tree-trimming party will get everyone in the holiday spirit.
AbleStock.com/Thinkstock

People began bringing Christmas trees (also known as Yule trees) indoors to decorate in the early 16th century. The practice probably started in Germany, but it spread quickly. Although the first decorated trees in the U.S. were cut and transported from local forests, city dwellers wanted decorated trees, too, and the first American Christmas tree lot opened for business in New York in 1851 [source: The Christmas Archives].

It's true that the Christmas tree isn't a symbol of Christian religion, but the tradition of decorating a tree can still be important: Like putting up a nativity scene or going to midnight mass, it creates a family ritual that can forge a link between the commercial and diverting aspects of Christmas and the substantive, faith-based underpinnings of the holiday.