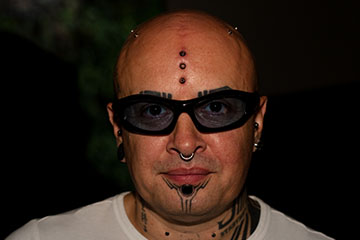 The trio of transdermals on that gentleman's forehead look as though they might be a bit irritated. Transdermals are notoriously bad at healing.
© Camilo Delgado Castilla / Demoti/Demotix/Demotix/Corbis

Transdermal implants create the appearance of external objects implanted straight into the body. In reality, the implanted object is an anchor with a threaded post. The post protrudes through a hole in the skin, and "jewelry" screws onto it.

In Aylward's "metal mohawk," now removed, the jewelry was thin metal spikes up to 1.5 inches (3.8 centimeters) long [source: Webb]. Body-mod artist Samppa VonCyborg has a mohawk of stout horns [source: Larratt]. Dennis Avner, aka "the Cat Man," now deceased, screwed whiskers onto implants in his eyebrows [source: Stokes]. Some people choose more traditional jewelry, like stars or studs that sit flush to the skin. An NYU professor who got transdermals in 2010 for an "art project" screwed a camera onto three implants on the back of his head [source: Orden].

Body-mod pioneer Steve Haworth designed both the procedure and the first anchor, drawing on a background in medical-tool engineering [source: Stokes]. Those in use 20 years later look a lot like the original.

Anchors are typically forged of implant-grade titanium [source: Russ Foxx]. Often custom-made, their exact designs can vary but generally consist of a flat base, either a circle or a rounded rectangle, that has a perpendicular, threaded post at the center [source: Beyond Body Modification]. The base has multiple openings in it, allowing scar tissue to grow through and firmly embed it in surrounding tissue, placing transdermals in the "permanent mod" category [sources: BMEzine Encyclopedia, Beyond Body Modification]. Size depends on the intended jewelry, with bases ranging from 6-16 millimeters (0.2-0.6 inches) in length or diameter and posts ranging from 1.5-5 millimeters (0.06-0.2 inches) tall and 2-8 millimeters (0.08-0.3 inches) in diameter [source: Rock The Body].

A lot of the controversy surrounding the modification relates to the procedure required to implant the anchor, which can only be described as surgery.

Of course, performing surgery without a medical license is legally hazy at best, so if you're the one doing the surgery, you'll likely describe it as "art" [source: Stokes].

Transdermals were revolutionary, but they weren't the first type of implant. Subdermal implants, which sit entirely beneath the skin, came first, and Haworth did the first one of those, too – a series of beads implanted in a woman's wrist to look like a bracelet [source: Norton]. Small, flesh-covered "devil horns" on the temples are subdermals. Lady Gaga's reptilian cheekbones and brow, which appeared on "The Tonight Show with Jay Leno" in 2011, would have been subdermals had they been real [source: The Herald Sun].