Anyone can walk out of a tattoo parlor with Michael Fassbender's rugged good looks needled into their skin, but could you take your celebrity devotion to the next level? Could you actually implant his physical essence into your dermis as well?

The Swiss startup Skin46 wants to make that happen. Sure, you'll have to scheme for a pinch of Fassbender's biomass on your own time, but the future looks bright for human-based tattoo ink. And if you can't snag your favorite celeb, you can always turn to loved ones you want to memorialize within your own body.

The concept itself isn't all that crazy. Humans have etched magical and memorable symbols into their skin for thousands of years. The process is already transcendent, entailing the merger of flesh and symbolism. What's more, this sort of biogenic tattoo is already a reality. English tattoo artist Mark Richmond made headlines back in 2009 when he tattooed himself with a portrait of his deceased son using ink derived from the boy's ashes.

The process all comes down to carbon — you know, the second-most abundant element in your body. High-temperature cremation burns off everything else, allowing you to do whatever you want with the elemental remains. Press it into an artificial diamond if you like, sure, or use it to derive a permanent tattoo ink. After all, most of the black ink you see in the tattooed world around you already contains petroleum-derived carbon black, arguably the safest tattoo pigment on a pallet that often includes heavy metal-derived reds.

Hey, and good news for Michael Fassbender: You don't have to incinerate his body to carry out your mad scheme. If Skin46 takes off, you can make do with hair. Those sandy, disheveled locks contains both Fassbender's DNA and a suitable amount of carbon. Company founder Andreas Wampl even plans to put his money (and maybe his bicep) where his mouth is by receiving the first Skin46 tattoo. The ink? Derived from the hair of his own son and daughter.

The company currently plans to launch a crowdfunding campaign in early 2016 with the goal of establishing a lab to refine its patented hair-to-ink processing method and facilities to expand availability. So maybe hold off on that epic back tattoo you're planning — the one with Fassbender riding a dragon through the pillars of Hercules — till Skin46 is off the ground.

Now That's Cool
Mastectomy tattoos have become a way for women who undergo the procedure to cover the scars. 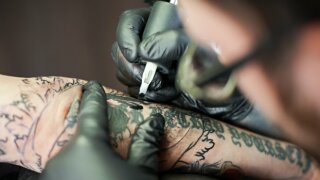 QUIZ: How much do you know about tattoos? 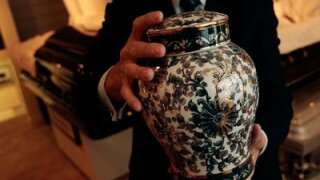