How do I put this thing on? 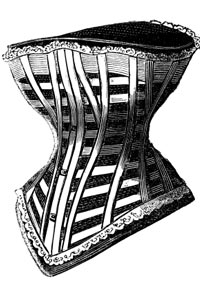 This illustration of a Victorian-era corset shows the boned structure and the busk closure at the front of the garment.
© iStockphoto.com/ivan-96

High-quality corsets from the heyday of the late 19th and early 20th centuries screamed femininity, and as a body-shaping garment, it needed to fit the figure better than anything else in the wearer's wardrobe. The perfect fit required a corsetiere -- a professional corset tailor -- which could be a very costly investment [source: Tyre].

High-quality coutil formed the basis of most corsets of the Victorian era. The fabric's dense weave and high resiliency against stretch made it an ideal choice, able to withstand lots of strain. Corset liners worn next to the skin protected the coutil from body oils and perspiration, minimizing the need for frequent washing.

In the front, a metal busk clasped the front halves together [source: Morua]. Steel and whalebone were common boning elements in the 19th century, prized for their strength and flexibility. The strength of both the boning and coutil were important in order to hold the high-tension corset together day after day [source: AbsoluteCorsets].

Most corsets of this style were laced using a bi-directional method, meaning the direction the lace takes through the holes alternates back-to-front, and then front-to-back. Knots were tied at the bottom to keep the laces in place, and an ample amount of slack was left at the holes where the waist is narrowest, creating two "bunny-ears." The corset would always be laced before it was put on.

Most old drawings show two people putting on a corset: the wearer and the lace-puller. Having two people definitely helped, but it could be done with just one. Leaving a 6- to 8- inch (15- to 20- centimeter) gap at the back of the garment, the corset was wrapped around the wearer and clasped at the front busk. The laces would then be pulled so that the proper fit was achieved. Most Victorian corsets were designed to have a slight gap between the sides of the back, allowing for slight shifts in the owner's weight.

Before the Victorian era, two other lacing methods were often used. Ladder lacing, sometimes seen in the Italian Renaissance, looks like you might imagine, with a single lace going down a hole, over, down, over, etc. in 90-degree angles. Spiral lacing, popular until the Victorian era, is similar to bi-directional but only has one lace and the holes were staggered [source: Thompson].

So now that you understand how to put on a corset and the benefits of wearing a boned garment, do you think a corset might be right for you?

The "bunny-ear" method of lacing a corset originated among ladies who couldn't afford servants. Because this method of lacing left two loops at the waist of the back of the corset, the wearer could close the front busk, then use the two loops to tighten the garment to the proper size all by herself.