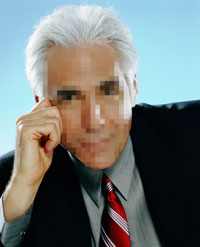 To gain a better understanding of video conferencing, it helps to learn exactly how audio and video signals captured in a classroom arrive at their destination. Beyond the obvious necessities of a camera and monitor, an audio system with microphone and speakers, and a control to place the call and adjust things like volume, you also need a device called a codec. The codec is the name of the piece of equipment that formats the audio and video signals for transmission. Its need will soon become apparent.

Successful classroom video conferencing relies on both the audio and video information being transferred in real time. These two streams of information take up a lot of room, which standard communication wires like phone lines can't handle. In order for the data to fit in the standard wires, it has to be converted into a smaller format so that it can be transported easily and efficiently. It's the codec's job to code the analog audio and video recorded with the microphone and camera into a digital format.

The information is broken down into smaller packets and then delivered to the receiving end by one of several possible methods such as cables, regular phone lines or an IP-enabled network. The codec on the receiving end then translates the digital signal back into an analog signal for display on the monitor.

Depending on the quality of the equipment involved, the reproduced signals may arrive in tip-top shape, or they may be degraded in the translation process. Lowered quality can occur because of how compression is achieved: by taking out little bits of information. Think of it as crumpling up a drawing so you can toss it across the room. Crumpling it into a ball allows you to get it there more quickly than trying to simply float it, but when you smooth out the paper, the picture will be somewhat distorted. The same thing often happens with video conferences, which leads us to some of its drawbacks.

Pixilation results from the codec having to deal with the rapid flow of information. To manage the load, the codec reduces the number of video images displayed per second, which makes movement look jerky. The codec also decreases the resolution of the photos, which takes out detail and makes images look fuzzy, like the man's face in the picture.

Audio delays happen when the codec can't keep up with the rate of transmitted sounds. By the time the sound gets compressed, transmitted and decompressed, th­e person is often finished talking, and awkward time delays occur. When this happens, you may notice that people's lips do not match up with what they're saying, which can be distracting.

Echoing might happen if your audio system isn't set up properly. Background noise can contribute to this problem, but it's usually easy to fix by resetting the echo canceler if there is one, moving microphones or using headsets and external speakers.

If users are new to the technology, the effects of data compression can make communication difficult and override the potential benefits of video conferencing lessons for schools. But with practice, teachers can easily overcome the obstacles. Other aspects of video conferencing, though, can affect the quality as well. Learn more about the different video conferencing setups available and the two most common transmission mediums on the next page.