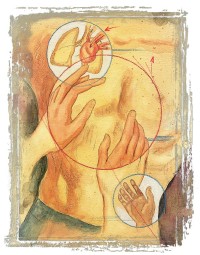 Certain versions of chi kung have been developed exclusively for use in healing applications. Typically, these chi kung healing methods focus specifically on strengthening the chi and on learning to emit it to heal others.

Chi kung healing techniques are taught and practiced openly throughout much of the modern world, including China where they are officially endorsed. In fact, chi kung healers can be found in private practice in any large city in North America or Europe. In Asia they are often associated with hospitals.

The New World Press, located in Beijing, reported as early as 1984 that Shanghai No. 8 People's Hospital has been using a form of chi kung to induce anesthesia in patients about to have surgery. In these situations, chi kung is sometimes used to supplement drugs and sometimes as an anesthetic by itself.

The report also noted that Chinese nuclear scientists were conducting experiments on chi in an attempt to find out how it works. They discovered that it was a type of "low frequency modulated infrared radiation" that can be emitted by certain individuals.

There are many other applications of chi kung healing as well. All chi kung practitioners learn to collect universal chi by absorbing it through chi gates and storing it in their bodies.

But the many chi kung practitioners who also learn to emit chi are reputedly able to transmit it without actually touching the other person. Known as wei chi, or out-flowing chi, this form of chi can be projected for a distance of 16 feet.

For healing purposes, though, the distance between chi kung healers and subjects is generally between one and three feet. Healers who are able to emit chi in this way are held in high regard in official circles, and many are invited to annual conferences where, among other things, they treat senior government officials.

Over time, certain chi kung healers claim to have developed a sixth sense that enables them to visually scan the internal organs and tissues of their clients for weakness and illnesses. They have learned to associate the different colors they see with different diseases. This ability helps the chi kung healer to identify illness and pathogenic conditions.

In a typical chi kung healing session, the patient will lie fully clothed on a treatment table. The chi kung healer may ask the client a number of health-related questions or may simply begin to emanate wei chi.

According to the theory, the wei chi strengthens the patient's personal chi to the point at which it becomes visible to the healer. This kind of X-ray vision can be regarded as an example of a Deva power.

At this point, the chi kung healer makes an assessment as to which parts of the body are unhealthy, which organs are affected, which acupuncture channels are associated with the organs, which prominent acupuncture points lie on those channels, and which type of chi kung treatment should be used.

Other chi kung healers see nothing unusual at all. They rely instead on a highly refined sense that develops around the hands. These healers typically feel one of a number of sensations radiating upward from the body. The hands need not even touch the client but simply feel vibrations through the air. In this way, the chi kung practitioner can isolate problem areas in the body.

There are well over a dozen different qualities of chi that are recognized in medical chi kung. Chinese pulse-reading doctors, famous throughout the world for their diagnostic abilities, are able to sense these same qualities by feeling the many variations in the pulse of their clients.