Burke and Hare: Murderers for Money and Science

Browse the article Burke and Hare: Murderers for Money and Science 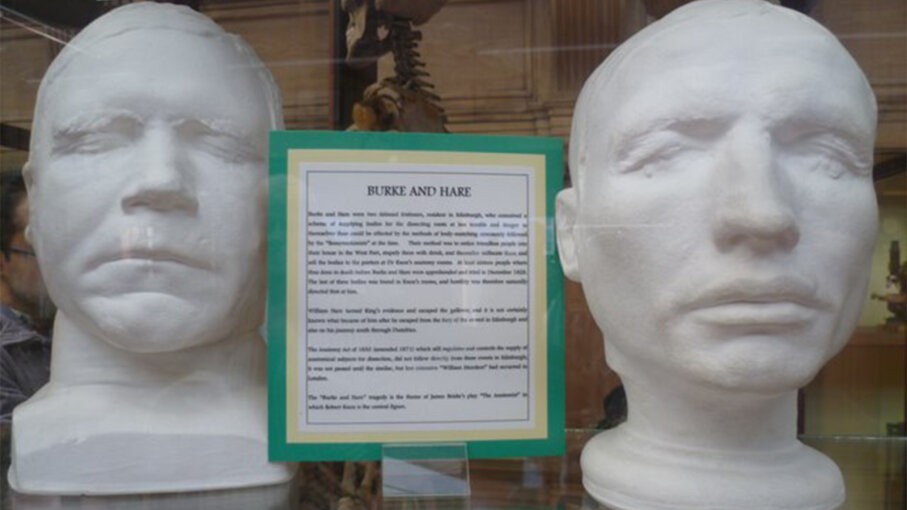 Masks of Burke (in death), left, and Hare (from a life cast) in the Anatomical Museum of Edinburgh University. kim traynor/Wikimedia Commons (CC BY-SA 2.0)

Of all the possible get-rich-quick schemes you could involve yourself in, many of us would stop short of serial killing, even if it meant you'd be aiding the advancement of science. But that's not the case for everybody. Take William Burke and William Hare, both Irish immigrants who ran a boardinghouse in Edinburgh, Scotland, and killed a minimum of 15 people during a 10-month period in 1827 and 1828. You know why they did that? Because they made a small fortune doing it.

Burke and Hare had no criminal records before they got into the murdering business — Burke was a cobbler and Hare was a laborer who owned a lodging house with his wife. When a boarder who owed the Hares a good deal of back rent died one day in November 1827, Hare complained to his friend Burke. The two decided the best way to recoup Hare's financial loss was to sell the man's corpse to an anatomy professor at the University of Edinburgh.

Anatomy research was a booming business in Edinburgh in the early 19th century, and though many human dissections were conducted every day in the city, human remains were hard to come by. Grave-robbing was frowned upon, but anatomists were allowed to study the bodies of deceased prisoners, suicide victims, foundlings and orphans. This didn't mean Edinburgh wasn't crawling with body snatchers — since the demand was high for cadavers and the supply relatively low, many anatomists used the services of "Resurrection Men" to fill their human corpse requirements. It was not technically illegal to dig up a dead body and sell it, since the dead didn't officially belong to anyone, but the general public hated this practice, so anatomists desperate for cadavers were willing to pay for bodies — sometimes in terrible condition — without asking questions about where the bodies came from.

A doctor and anatomist named Robert Knox was a popular lecturer at the University of Edinburgh when Burke and Hare came to him with their first cadaver. Knox paid them £7.10 (a little over $9) for the body — almost £750 ($986) today — and almost double what the dead man owed Hare in back rent. The body was pretty fresh, which pleased Knox. He was even more pleased a few months later with the body of Burke and Hare's first murder victim — a lodger who fell ill with fever in the boarding house, and who the two men suffocated. Knox paid them £10 ($13) for that cadaver — over £1,000 ($1,300) today.

Over the course of the next year, Knox bought a total of 16 bodies from the pair — mostly women. Most of their victims were killed, most likely with the knowledge of the murderer's wives, by plying them with whiskey and then suffocating them. Burke and Hare preyed on people who were poor and alone or disabled: During the trial, the three victims named in the indictment were a mentally disabled young man, a young woman reputed to be a prostitute and their final victim — the one who got them caught — a middle-aged Irish woman, reportedly in Edinburgh searching for her missing son.

Burke and Hare were discovered by a couple staying in Hare's boardinghouse — they saw the two men drinking with the woman in the evening, and the next morning she had disappeared. They found her body packed in straw under a bed, ready to be taken to Knox. After the couple alerted the police, the authorities raided Knox's cadavers and found the woman's body among them.

In the trial, Hare testified against Burke, and he and his wife were released. Burke's wife was also released, but Burke was executed. Knox was exonerated of all charges because Burke testified that Knox didn't know about the provenance of the bodies he was buying.

Now That's Interesting
The word "burking" came out of the Burke-Hare trial — it means to smother someone to death while compressing their chest.