Let's Get (Back) Together 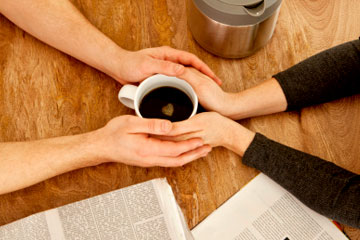 Getting back together with an ex is becoming more common.
Tooga/Getty Images

During the initial throes of post-breakup angst, the quickest route back to happiness might lead straight into the arms of the most recent ex-partner. Re-evaluating life without someone special in it can burnish the positive aspects of a relationship and push the negative patterns into the background. Missing the sexual intimacy that comes with longer-term mating can also cause couples to rethink whether staying apart is really that wise. Certainly, it took Elizabeth Taylor and Richard Burton some practice to part ways.

Although it can be unhealthy to fixate on getting back together with an ex-partner, slowing the psychological process of relinquishing the romance, it's happening more often these days. According to a 2010 study at Texas State University, San Marcos, about 20 percent of adults will engage in an on-again, off-again relationship with a significant other over their lifetime [source: Crook]. Young folks are even more likely to change their minds about leaving someone behind, with as many as 60 percent of teenagers breaking up and getting back together down the road -- and doing so twice, in a majority of cases. This represents a sharp uptick from related research in the late 1980s and early 2000s, which estimated a get-back-together frequency of only 3 to 40 percent [source: Crook]. Based on research regarding motivations for reviving relationships, that tendency toward mending fences might imply greater insecurity among up-and-coming dating pools.

For instance, a 2011 study by the University of Texas at Austin assessing people's reasons for getting back together with an ex highlighted a common theme of relational ambiguity. Along with the expected lingering sentiments, participants noted misunderstandings about the ramifications of a breakup and its negative impact on the couple's post-split relationship as grounds for giving it another shot [source: Beck]. But on-again, off-again relationships may inherently restart at a disadvantage, according to related research. On average, men and women involved in cyclical romances report more negative aspects than positive ones, particularly communication problems and instability [source: Dailey et al]. That isn't to conclude that cyclical relationships are doomed for failure, but to emphasize that getting back together doesn't dissolve past problems. Instead of framing it as a fresh start, it would be more accurate to consider reuniting as a redefinition of the existing relationship, warts and all [source: Dailey et al].

Whether or not someone decides to grant an ex a second chance, moving on from the emotional trauma inflicted by a breakup is crucial.

Same-sex couples are better at staying friends after romantic fallout, compared to opposite-sex couples. According to a 2002 study, lesbian couples are the most likely to maintain post-breakup friendships, followed by gay men [source: Lannutti and Cameron]. Straight people, it seems, prefer to cut and run.