Why do breakup songs hurt so good?

Music: A Cure for What Ails 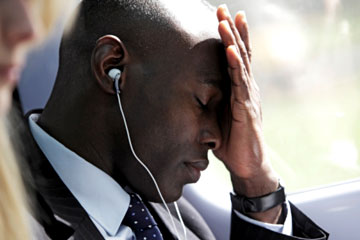 Medical researchers have started paying closer attention to whether more music should be piped into the healthcare process, beyond the Muzak in doctors' offices. Although symphonies and sonatas can't erase pain with the precision of an analgesic prescription, they aren't completely inert, either. A study published in August 2011 found that breast cancer patients undergoing mastectomies experienced lowered blood pressure and reported lower anxiety when music was playing in the background before, during and after the operation [source: Binns-Turner et al]. Similarly, children treated to post-operative music required less morphine during their recoveries, compared to peers in quieter environments [source: Nilsson et al].

Melodious notes serve as an auditory salve because they stimulate the brain's limbic system that regulates pleasurable sensations, such as rich bite of a cupcake [source: Totten]. That network of neurons releases pleasure-prompting dopamine in response to a person hearing his or her favorite jams. Post-breakup, the limbic system is also what's left hurting. For that reason, putting those heartache songs on repeat can somewhat satiate the brain pathways that were formerly stimulated by the ex-romantic partner. With the limbic system revived, feelings of hopelessness and depression can ebb as well.

The anxiety of extreme emotional turmoil that comes with splitting up also may contribute to the satisfaction derived from listening to sad, heart-heavy tunes. For instance, a study conducted at the University of Utah's Pain Research Center found that music-mediated pain relief was most effective among anxious patients [source: Bradshaw et al]. On average, songs don't provide a huge amount of physical pain relief; study participants reported a mean 0.5-point drop in pain on a zero-to-10 scale when they listened to music [source: Limjoco]. But for people grappling with the climactic anxiety of anticipating of a surgical operation or slogging through romantic despair, music's minor analgesic effect is amplified; every little note helps.

No wonder the musical library of breakup songs is infinitely extensive, cross-pollinating every possible genre. Since doctors have yet to concoct a cure for heartache, listening to and belting out the blues may just be the next best therapy.

Musical tastes can potentially be a relationship dealbreaker, according to a 1989 study published in the journal Communication Research. A penchant for country music is particularly polarizing, researchers found, souring sexual attractiveness ratings among men and women alike [source: Benson].