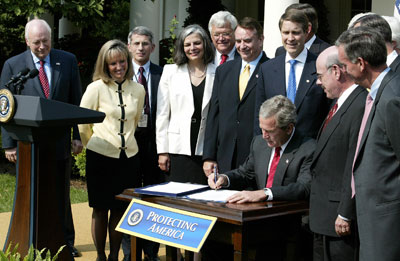 As a result of the terror attacks on New York and Washington, D.C., President George W. Bush implemented two different programs to help safeguard the citizens of the United States: Bio-Watch and Project Bioshield.

Bio-Watch was born shortly after the anthrax mailings of September 2001. It's funded and overseen by the Department of Homeland Security (DHS), but because of the sensitive nature of the program, there aren't too many details available to the general public. We do know that it's an early warning system that detects airborne pathogens in select cities across the United States. Media reports suggest that there are nearly 30 cities currently using Bio-Watch and as many as 120 cities are in line for future implementation.

Bio-Watch monitors are reportedly placed on top of selected buildings in target cities to collect air samples, which are transported to laboratories on a daily basis for analysis. The symptoms of many of the illnesses from bioterror pathogens aren't apparent for several days and can even be mistaken for common illnesses like cold and flu. The early detection that Bio-Watch provides could make a big difference in emergency response time.

There are three main elements to Bio-Watch, and each is coordinated by a different government agency:

We know that anthrax and smallpox are on the list of pathogens that Bio-Watch detects, but the others are closely guarded by the DHS. So far, there's only been a single positive detection that we know about  -- bacteria that causes tularemia was found in Houston, Texas, in 2003. Detection was reported on three consecutive days, followed by negative results on the following days. Precautionary measures were taken by local law enforcement officials, but the incident never resulted in any illness or arrests.

The effectiveness of Bio-Watch has been under fire since its implementation. One reason is that Bio-Watch detects only outdoor pathogens. Most of the biological terror attacks around the world thus far have been indoor incidents -- subways and offices. Another concern is that the turnaround on samples is 12 to 48 hours after an attack has taken place, which isn't exactly ideal. Others complain that it's not cost-effective for the results it achieves. Reports place installation costs at $1 million, with another million for annual operation and upkeep. In February 2008, the DHS requested a $34.5 million increase in funding to design and implement the next generation of Bio-Watch.

Project Bioshield is another program that President Bush put into action after Sept.11. Bioshield provides the government with the resources it needs to develop, acquire and stockpile medical countermeasures against bioterrorism. The program allows for further research, development and acquisition of next generation vaccines by granting $5.6 billion over the next decade. It also established the Emergency Use Authorization (EUA), which makes sure that these vaccines and medicines are accessible following a Declaration of Emergency by the Secretary of Health and Human Services.

For more information on terrorism, please put on your gas mask and visit the links on the following page.