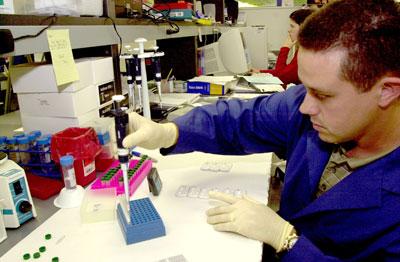 The Food and Drug Administration (FDA) plays a vital role in the efforts to counter a bioterrorist attack with five broad strategies:

The FDA set up the Office of Crisis Management (OCM) to help implement these efforts. The OCM is responsible for maintaining vigilance 24 hours a day, seven days a week, and coordinates the emergency response efforts for the five FDA centers around the country in the event of an attack. It's also responsible for heading up emergency training drills, securing the FDA buildings and educating employees in crisis management methods.

The FDA has always been responsible for the regulation of products for public consumption -- including food, drugs, medicine, medical devices, animal feed and cosmetics. In this age of heightened security threat, it's now responsible for safeguarding these products as well. The FDA is working hard to develop medical countermeasures such as vaccines and devices that can prevent, diagnose and treat bioterror illnesses.

The key to an effective response in the event of an emergency is coordinating the efforts of many different agencies. After Sept. 11 and the anthrax attack, the FDA joined forces with the Center for Disease Control (CDC) and the Department of Defense (DoD) as well as with foreign government agencies in order to ensure that medical supplies were available and at the ready. They developed the Strategic National Stockpile (SNS) -- a large cache of antibiotics, antitoxins, medical supplies, vaccines and surgical supplies. The FDA packaged emergency drug parcels called push packs which can be sent to any destination in the United States within 12 hours.

One of the methods a terrorist might use is to poison livestock or animal feed. The FDA's Center for Veterinary Medicine (CVM) is working with Iowa State University to establish a database that incorporates all veterinary labs across the country. This would be used to improve response time for animal or feed related terrorism. The network also establishes the veterinary centers that have testing capabilities for feed and animal tissue.

The FDA has a lot of experience dealing with accidental poisoning and natural food and feed contamination. Managing these accidents has helped them to prepare for the prospect of a purposeful attack. In addition to this experience, new safeguards have been put in place to help guard the U.S. food supply in the following areas:

Tainted blood is another way that a terrorist might implement an attack, and the FDA is partially responsible for protecting this supply. They've worked with the American Association of Blood Banks (AABB) to write and distribute handbooks on emergency and disaster related coordination. This handbook covers everything relating to blood -- from how to handle an influx of donors in a disaster to the proper screening and testing methods to ensure that donated blood and the existing supply remains untainted.

Click ahead to the next page to learn about the two government projects in place to help protect citizens of the United States from a bioterrorist attack.