Bioterrorism: After an Attack 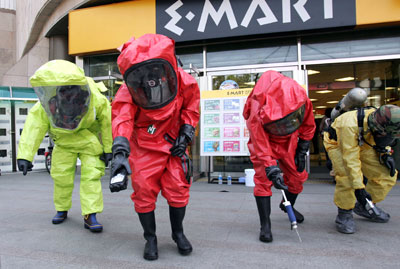 Emergency services in chemical protection clothing participate in an anti-chemical and biochemical terror exercise on May 21, 2007 in Seoul, South Korea.
Chung Sung-Jun/Getty Images

The Center for Disease Control (CDC) is one of the major players in containing a bioterrorist attack and treating the infected individuals. Since anthrax is the most likely agent to be used in a bioterror incident, the CDC has developed a vaccine against it. However, it's available to only "high-risk" individuals such as:

A total of six injections over an 18-month period are required to be fully immunized against anthrax, followed by an annual booster shot. Of course, this is only a vaccine that prevents someone from becoming infected by anthrax and is typically available only to the U.S. military. Treatment of anthrax poisoning is a different subject. Doctors in September 2001 prescribed the antibiotics penicillin, ciprofloxacin and doxycycline to treat the victims of inhalation anthrax. Treatment of this kind of anthrax needs to start early in the progression of symptoms. If it's begun after the symptoms have progressed, then the bacteria may be killed but the toxins will remain in the body.

Additionally, certain strains of anthrax may be resistant to various antibiotics. Lab analysis determines which kind of anthrax is at work and which antibiotic should be used. You can read more about this pathogen in How Anthrax Works.

There are also licensed vaccines against smallpox and an antitoxin treatment available for botulism poisoning, but none of these are available commercially.

The key to handling a bioterrorist attack is to have healthy first responders who can treat victims without becoming sick themselves. After Sept. 11 and the anthrax attacks, the U.S. government sponsored a program to vaccinate 500,000 health care professionals against the smallpox virus. But it was left to each state to head up the program and in the end, less than 40,000 workers were vaccinated [source: Medical News Today]. Workers are usually reluctant to get a vaccination that injects them with a live form of the virus -- especially when there's no actual medical emergency taking place.

If all this makes you feel a little helpless, you'll be glad to know that there are a few things you can do to increase you chances of survival in the event of a bioterrorist attack. We'll take a look at those in the next section.