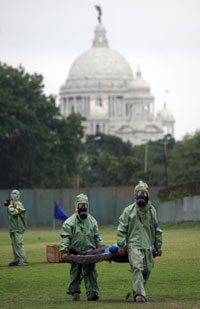 Indian soldiers shift an injured man to an emergency treatment center during a mock exercise in the event of a Chemical and Biological terror attack, in Kolkata on April 17, 2008.
Deshakalyan Chowdhury/Getty Images

It takes a lot of money and technology to pull off a mass-scale bioterrorist attack, so it remains more of a threat than a reality. In order to launch an effective attack, the organization needs to be extremely well-funded and have access to a great deal of scientific expertise. This means that only large terror groups that may even have state funding could execute an effective mass attack. The group would need several things in order to accomplish this:

There are only a few organizations in the world with the means to pull something like this off. The Aum Shinrikyo terror group of Japan is well-financed and has attempted to disseminate anthrax and botulism on multiple occasions. So far, it's been unsucc­essful. Iraq was believed to be developing biological weapons to be delivered by scud missiles, but this is classified as biological warfare, not a terrorist attack. The Soviet Union and the United States also experimented with biological weapons before suspending their programs.

Smaller, less sophisticated groups have pulled off minor terrorist attacks using biological agents, but the goal is usually to disrupt society and send people into a panic. The 1980s salmonella poisonings in Oregon are a good example of this kind of biological disruption. Another type of bioterrorist is the lone individual looking to make a social or political statement. Although the case remains unsolved, it's believed that the anthrax attacks of 2001 were the work of a single person or small group of individuals.

The release of an airborne toxin is one of two ways that a terrorist cell might effectively attack a large amount of people at one time. The other is by poisoning their water or food supply. Chances are, if the water or food supply were tainted, it could be contained quickly and the attack wouldn't result in massive casualties. But the civil disruption, panic and financial ramifications would be great -- and most times, that's exactly what terrorists are after.

The effects of the Sept.11 attacks went far beyond the loss of life in New York and Washington, D.C. The airline, insurance, tourism and shipping industries all took a hard hit, which, in turn, had an effect on the overall economy of the United States and world. The direct costs of cleanup and rebuilding in New York alone topped $27 billion, and the projected cumulative loss in national income through the end of 2003 as a result of Sept. 11 came to half a trillion dollars [source: Looney].

In the next section, we'll take a look at what can be done in the event of a bioterrorist attack.