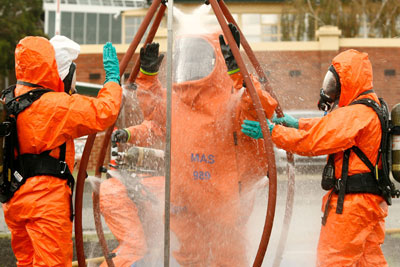 The North Atlantic Treaty Organization (NATO) lists 39 agents that potentially could be used as biological weapons, including viruses, bacteria and toxins. Before you go out and spend a fortune on gas masks, you should know that many of these aren't as likely to be used because of the nature of the agent. In most cases, it would take far too much of any single agent to cause mass amounts of illness or infection. Take ricin, for example -- nearly eight metric tons of this deadly toxin is required to achieve 50 percent lethality over a 62 square mile (100 km) area [source: CDC]. These kinds of statistics make it easier to narrow the list of potential lethal agents that a terrorist might use.

To help categorize and prioritize the study of these agents, the Center for Disease Control (CDC) separates them into three main groups:

Category A agents are the only ones that are suspected as viable bioterrorist threats. This category includes:

Category B agents include salmonella, ricin, cholerae, typhus and undulant fever. These are less of a priority for the CDC because of the unlikelihood they'd be used in a terrorist attack. As for Category A agents, viruses like Ebola are expensive to produce and technically challenging to sustain, in addition to the difficulty of successfully delivering them in large doses. This makes them less likely to be used in a terror attack, but the fact that they can be spread from human to human keeps them in Category A.

Bacteria are much easier to produce than viruses, so they remain the most likely agents for bioterrorism. The World Health Organization (WHO) performed a study in 1970 and found that anthrax and tularemia headed the list of most deadly bacterium with the largest airborne spread. The death rate for untreated anthrax is more than 80 percent; because it can be contracted in three different ways, it's at the top of the list as a potential biological threat.

Smallpox is the one virus exception and ranks alongside anthrax as the most deadly potential threat. Smallpox can also be spread through the air and is able to be manufactured in large doses. The Soviet Union reportedly produced smallpox by the ton during the heyday of the Cold War, and Iraq has experimented with the production of closely related camelpox. Even though smallpox has been eradicated through vaccination, it's believed that no more than 20 percent of the world's population is still immune. Smallpox is also highly contagious, with a single case able to spread to 20 or more people in short order.

In the next section, we'll look into the groups most likely to be involved in bioterrorism and the methods they could use.