Bioterrorism Act: Titles I and II

Title I One of the major parts of a successful public health emergency plan is a quick and easy way to get the word out. If anthrax spores are detected in the air in Seattle, Wash., then health care providers in Miami, Fla., should know about it as quickly as possible. A bioterrorist attack could happen anywhere and spread in a very short time. One of the main goals of Title I is to make sure that these people can reach others if an attack occurs.

Title I also addresses the preparation of local hospital emergency rooms to deal with a biological attack. First-aid classes have formed. Grants have provided funds to add staff and supplies to the ERs. Quarantine procedures have been set up in case of an outbreak. In order to be able to contain outbreaks quickly, the BTA also provides automatic emergency medical waivers for uninsured people or those without Medicare or Medicaid.

Another important part of Title I is its establishment of the Strategic National Stockpile (SNS). The SNS took the place of the National Pharmaceutical Stockpile (NPS) which was established in 1999 by the department of HHS. The new stockpile is a stash of emergency vaccines, medicines and medical supplies available in case of an emergency. The SNS can also be tapped if a natural disaster occurs.

The BTA has also set up "push packages" in guarded warehouses all across the country. These packages contain emergency vaccines and treatments for the most likely biological agents and can be distributed to any location in the United States within 12 hours of being ordered by the CDC. 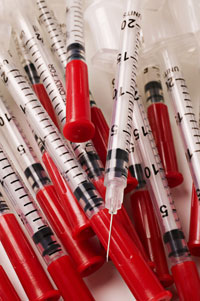 Garry Gay/Getty Images
­Let's hope the Strategic National Stockpile doesn't look like this.
Title II One of the challenges in preventing bioterrorism is that many of the biological agents that could be used in an attack are often studied by universities, hospitals and other research facilities. Title II ensures that the government knows the identity of everyone that works with these agents. APHIS makes sure registration standards and procedures are followed. Every research lab, university, and medicine and vaccine manufacturer must register with the APHIS office. This way, the government knows which facility or company is handling these toxins and agents.

Safety officers at research facilities are in charge of assisting employees with the approval process. It can be quite lengthy -- it can take up to three months for FBI approval. The process includes fingerprinting and a detailed background check. Any person found possessing of these toxins o­r agents without going through this process can face both criminal and civil charges. This is not an empty threat -- faculty and graduate students all over the United States have been prosecuted for breaking this law.

On the next page, we'll look into Title III of the BTA.