Browse the article The Backstory on Backpage.com, the Adult Classifieds Site That Got Shut Down 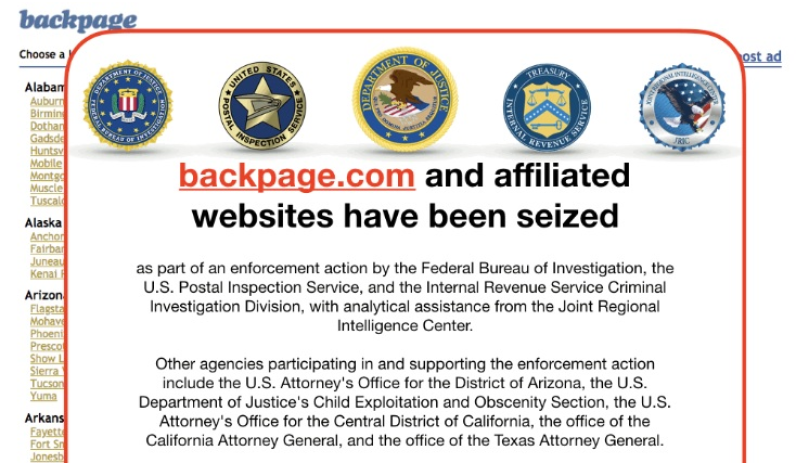 A screenshot of the online classifieds site Backpage.com, five days after being shut down by a group of U.S. government agencies Screenshot of Backpage.com by HowStuffWorks

On April 6, 2018, an online classifieds site called Backpage.com went offline. In place of the usual links to personals there was a message from a coalition of U.S. government agencies stating that they had taken steps to remove the site and that details would follow later that day. Those details focused on an indictment accusing the site and its founders of multiple counts of conspiracy, money laundering and facilitation of prostitution. In addition to taking down the site, the U.S. government indicted seven of the officials who oversee Backpage.com.

At the heart of the matter is the desire to do something to counteract sex trafficking and sex slavery. Statistics on such crimes are problematic as many instances may go unreported, but there's no denying that human trafficking is a global problem. In 2012, the International Labor Organization issued a report that estimated nearly 21 million victims of human trafficking globally. That figure includes not only sexual exploitation victims but also others who were used as slave laborers.

In the United States, both the House of Representatives and the Senate have proposed legislation that is supposed to combat sex trafficking. The House version is called the Fight Online Sex Trafficking Act, or FOSTA, and the Senate version is the Stop Enabling Sex Traffickers Act, or SESTA. Neither has been signed into law yet, but both take aim at sites that appear to permit or turn a blind eye to advertising illegal sex work in an effort to combat sex trafficking.

A concept called safe harbor plays a crucial role here. When Congress passed the Communications Decency Act in 1996, they included a passage that provides protection for websites. Essentially, the concept is that a website's administrator isn't responsible for the content created by that website's users. Rather the administrator is offering up a website as a platform and isn't responsible for the way that people use that platform.

Another piece of legislation that contains a safe harbor clause is the Digital Millennium Copyright Act (DMCA). This episode of TechStuff explores the DMCA and why safe harbor is such an important protection.

But both the proposed FOSTA and SESTA legislation argue that the safe harbor concept wasn't meant to protect people who knowingly allow illegal transactions to occur on their platforms. The charges against Backpage's executives state that they knew of and perhaps even welcomed ads from people guilty of sex trafficking. If evidence supports these accusations, the officials could face large fines and prison sentences, even without the proposed legislation becoming law.

In July 2017, The Washington Post published an article that alleged a contractor hired by Backpage had run a campaign in the Philippines to lure advertisers away from competitors to use Backpage.com instead, particularly for ads relating to the sex trade. The article also stated that the company had previously edited language in ads for sex that suggested the involvement of minors rather than deleting the ads from the site.

Backpage officials, for their part, have said they cooperate with officials to detect and stop cases of sex trafficking. They argue that Backpage.com ads actually are useful tools that law enforcement can leverage to identify criminals and pursue them. They say that without them, investigators would face many more challenges to find criminals and sex trafficking would continue but be harder to detect.

The proposed legislation and the takedown of Backpage.com has created a fiery debate about free speech, sex workers' rights and effective strategies to combat sex trafficking. Advocates for the legislation point to very real, tragic stories of people who were forced into lives of sexual exploitation. These people, some of whom are minors, have little to no agency of their own.

But critics of the legislation say that not only will moves like the silencing of Backpage.com do little to halt the sex trafficking problem but also put consenting sex workers at risk. The real problem that should be addressed, say the critics, is the stigma against sex work in general. They argue that criminalizing sex work creates the very market for sex trafficking, and that decriminalization and regulation could not only eliminate sex trafficking but also improve the lives of people who have chosen to be sex workers.

The criminality of prostitution creates a very tricky situation. There seems little doubt that prostitution will remain even in the wake of legislation like SESTA and FOSTA. There will continue to be a demand for such services, and where there is a demand there will be a supply. But some human rights activists argue that by shutting down services like Backpage.com the United States is making life more dangerous for sex workers in general. They won't be able to rely upon online services to evaluate potential clients and weed out any who set off warning signs.

There's no question that human trafficking is evil and should be stopped. But are the proposed laws a sincere effort to stop an evil practice, or are they using sex trafficking as an excuse for a blanket attack against sex work? Could the laws be a threat to free speech? Is there enough evidence to suggest legalization of prostitution would be a more effective solution to the sex trafficking problem? And if so, is there enough support in the U.S. to act upon that information? In the meantime, expect to see personal ad sections disappear (Craigslist.org has already taken this action) from online sites.