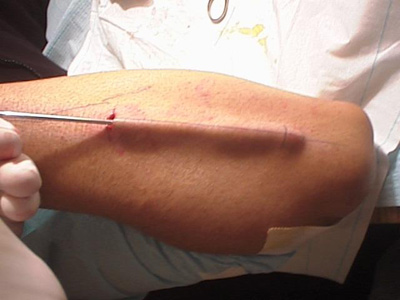 Pinter performs the implant surgery in his workshop in rural Kentucky.

Both Singer and Pinter were reluctant to give a lot of details about the procedure. As Pinter put it, "...it's not really legal in the strictest sense of the word." But we were able to talk to them about some facets of PSVI "installation."

Singer explains, "Like a real tattoo, the implants are all placed subcutaneously, everything except the contact surface of the magnetic sensor. That's a little shallower. Carl only makes one incision per component and there are three components."

The battery pack is implanted first. It's about the size of two shirt buttons stacked on top of each other. Its placement is determined by the location of the tattoo. Because the sensor is so close to the surface of the skin, Pinter tries to place it somewhere where it will be concealed and protected. "Fleshy parts are good, like underneath the arm or right around the back flab if it's lower back tattoo."

Pinter continues, "The hardest part is fishing those wires through to connect all three pieces. If I'm gonna screw it up, it'll be on that part. The LCD is hardwired and I have to fish those two leads and the ribbon cable through the first cut, up under the flesh and out of the second cut. It's like pushin' a puppy hair through puddin'. Once I pull it out of the cut I can hook up the (control) module and load her in. The battery pack and sensor are also hardwired so it's the same thing. I gotta fish those leads through the third cut and up into the second one. Then you hook her up, power her up, sew those cuts up and it's Miller time."

Carl, the fact that you refer to "surgical" incisions as "cuts" scares me.

"Really? I'm scared of getting shot in the a-- while riding in a helicopter."

We'll look at the safety issues surrounding animated tattoos next.