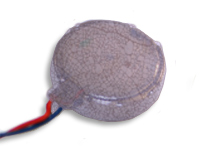 The magnetic sensor allows the battery to be charged without puncturing the skin.

Like any electronic device, a PSVI needs power. The PSVI is powered by a rechargeable NiMH (Nickel-Metal Hydride) battery.

The magnetic sensor is charged when it is attached to a special Singer-designed power adapter. One end of the adapter is a conventional electric plug and the other end is a magnetic connector. This allows the battery to be charged without having to plug directly into the skin. You simply connect the two magnetic surfaces and the battery charges. Singer explained, "it's something you do while you're watching TV or sitting at work."

Singer admits that plugging yourself into a wall takes some getting used to.

"It's like anything else...people think its weird now, but we'll all be plugged into some type of device eventually. It's a small price to pay for a really cool animated tattoo...and this could be the bridge to an exciting new era of plugging in people. Maybe we don't need to eat anymore? Maybe we plug in? Right?"

It can take up to three hours to get a full charge. Depending on the size and complexity of the tattoo, a charge can last anywhere between four and 12 hours.

When pressed on questions about battery replacement Singer declined to answer, but Pinter had this to say: "I don't know, man. We'll cross that bridge when we come to it...hadn't happened yet. Those batteries have pretty good long life on 'em. Hell, eventually all those backlights on the LCDs are gonna go down too, so...what are you gonna do? It ain't perfect but it's pretty darn cool -- you feel me?"

Next, we'll look at the implantation procedure.

The Power of Magnets

Animated tattoos are not the only things that recharge their batteries magnetically. This magnetic recharging technology can be seen on the new Apple Macbook Pro laptop computer.