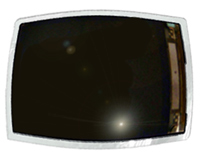 The flexible LCD is 2 inches high, an inch-and-a-half across, and just over 2 millimeters thick.

­The LCD is the heart of the animated tattoo. If you understand how LCDs work (check out How LCDs Work fo­r a detailed explanation), you are probably asking yourself, "How can an LCD be implanted in the skin?" Let's look at how Jay Sean made this happen.

LCDs need two layers of polarized glass and a light source to work properly. Singer was able to handle both of these needs with a special thin film that he stumbled across while working with it for use in an unrelated application.

Two film layers are used for each PSVI display. Each layer is actually two pieces of this film pressed together. One piece is covered in a special polarized coating and the other remains clear. The film has the same properties as polarized glass when put together in this way -- it even looks like glass.

­The ­non-polarized sides of the film layers are coated with a special polymer that wears grooves into them. When the layers are put together, these grooves are positioned at right angles to one another and a coating of nematic liquid crystals is sandwiched in-between them.

Each inner layer of the film is also fitted with half of a simple grid made of tiny indium-tin-oxide fibers. The grid controls individual pixels on the display and is part of an integrated circuit controlled by the appropriately-named control module.

The last piece is the light source -- LCDs must be backlit to work. To deal with this, Singer once again turned to his special film.

"This film is real thin. When you take dozens of layers of it and press them together real hard...you get this thin wafer."

Singer covers this wafer in a reflective surface, then threads in a hair-like filament that has low power draw and long life. The filament lights up, and that light is reflected off of the shiny surface of the wafer, successfully backlighting the display. There are two thread-like cables for power and a small ribbon cable for data. Singer sums it up, "What we have here is a simple, small and flexible one-color passive matrix LCD. Pretty d--- cool if I say so myself, and I often do."

We'll look at the control module in detail next.