Browse the article When, and Why, Did America Start Calling Its Citizens 'Consumers'? 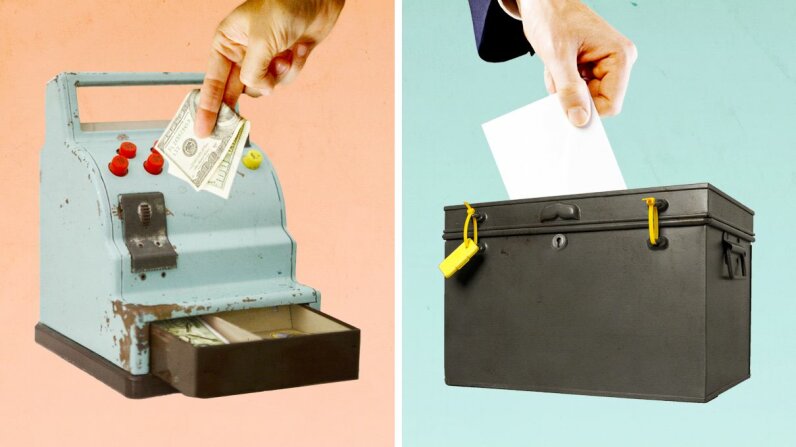 Does framing the people within a country as "consumers" encourage a transactional relationship to civic interaction? That's what some critics say. Photolove/Anthony Bradshaw/Hapa/Alija/Getty Images

In a recent opinion piece "How Trump's immigration plans hurt American citizens' pocketbooks" published in the political newspaper The Hill, Maurice Goldman criticized President Donald Trump's plans for an immigration crackdown by pointing to the cost of building a border wall, hiring more enforcement agents and reducing legal immigration channels. But what was particularly interesting was the columnist's choice of words in one key passage. In contrast to the headline, which used the word "citizen," Goldman instead noted that "you, the consumer" would pay for the expense of Trump's policies.

That may not have been just a slip. It's hard to say exactly when it started, but in recent years, there seems to be an increasing tendency to use the term "consumer" interchangeably with "citizen," even when the discussion isn't taking place strictly in an economic framework. And some political experts say that the choice of words may reveal a subtle but worrisome shift in how we see ourselves and our role in American society — away from the notion of working together with others toward the common good, and toward a nation of individuals primarily motivated by self-interest.

Does a focus on the economic role of U.S. citizens diminish their civic duties?
Tom Pennington/Getty Images

Using consumer interchangeably with citizen "has become part of our default discourse — the normal way we view society and people," says Jathan Sadowski, who earned a doctorate from the University of Arizona's School for the Future of Innovation in Society, and currently is a guest lecturer at Delft University of Technology in the Netherlands. (He also wrote this 2015 article, titled "Stop Treating Citizens as Consumers.")

"Just look at the recent presidential election," he says via an email interview. "This consumer vs. citizen language is often used when analyst and pundits talk about elections: voters are just consumers with preferences and the election is a marketplace of products to choose from. In the store we vote with our dollar. We are told that elections are functionally the same thing. You just use a ballot instead of a buck to cast your vote. This understanding of democratic processes as a marketplace is just one more place where the citizen is overtaken by the consumer."

According to the Online Etymology Dictionary, both words have been around for centuries. The word citizen dates back to the 1300s, though it originally meant the inhabitant of a city, and didn't take on its present meaning — a person who has rights and responsibilities in a society — until around 1610. The word consumer arose in the 1400s, though back then, it meant someone who squanders or wastes things. It took on a less pejorative economic meaning — that is, a person who uses goods and services and does the opposite as someone who's a producer — around 1745.

Michael Munger, director of the Philosophy, Politics and Economics Program at Duke University's political science department, notes that in according to Google Books' Ngram Viewer, the word "consumer" seldom appeared in print until about 1900. But starting around then, it steadily rose until it passed up "citizen" in frequency in the late 1950s, and now is used about three times as often.

Munger theorizes that the shift in usage had to do with the rise in the 20th century of progressive politics. "The Progressives primarily saw citizens as being helpless, trapped by large forces — especially corporations — that citizens couldn't deal with," he writes in an email. The New Deal social programs devised by Franklin Roosevelt in the 1930s and Lyndon Johnson's Great Society effort of the 1960s, he argues, reinforced the idea that participation in politics "was mostly a way of getting your share of consumption."

Politicians' increasing use, starting in the 1960s, of sophisticated marketing techniques borrowed from sellers of products such as breakfast cereal, cars and antiperspirants also may have played a role. Today, campaigns gather and analyze mountains of data to conduct microtargeting efforts, which look at individual voters' attitudes and behaviors and what might be the best way to reach them. And government itself is being judged as if it were a consumer business. The American Customer Satisfaction Index even rates the federal government on how people feel about their interactions with it. (It got a 68 percent positive rating in 2016, up from 63.9 percent the previous year.)

Constituents attend a town hall meeting with U.S. Rep. Tom Price in Florence, South Carolina, on Feb. 23, 2017. Critics of the term consumer say that it focuses on transactions and minimizes the participation required in a democracy.
Sean Rayford/Getty Images

This isn't just semantics, either: The words we use can have an impact on how we live. A 2012 study published in the journal Psychological Science found that the choice of words may exert a subtle influence upon how we see ourselves. In one part of the study, people who answered a "consumer response survey" tended to express more materialistic, self-centered values than those who answered a "citizen" survey. In another part, researchers presented subjects with hypothetical situation in which people had to share water from a well, and labeled them as either consumers or citizens. Subjects who got the "consumer" identity tended to distrust others more about water sharing, felt less in partnership with the other subjects, and felt less personally responsible, compared to those who were labeled "citizens."

To the extent that the role of citizen and consumer is merging, "it seems to underscore a shift away from viewing Americans as having responsibility in our political system and toward a more individualist view of what it means to be American," says Josh Pasek, an assistant professor of communication studies at the University of Michigan. "Your job as an American citizen requires that you fulfill key democratic norms, such as being informed, deliberating about political issues, and participating in civic and political life. As an American consumer, your actions are relevant only to the extent that they respond to economic incentives. The responsibility to be engaged and participatory is not your own, but instead depends on a system that is oriented to bring you in."

Frank Trentmann, a professor of history at the University of London and author of the book "Empire of Things: How We Became a World of Consumers, from the Fifteenth Century to the Twenty-First," thinks that the blurred distinction between consumer and citizen may make it tougher for people to come together to solve problems. "Not all consumers see the world in the same way, and hence concerted action is difficult," Trentmann writes in an email.

That's why some would like to see us go back to seeing ourselves differently. As political commentator Mark Shields wrote in 2012, maybe it's time that Americans started insisting that leaders treat them not like consumers, "but as citizens who recognize that we have, in addition to rights and privileges, real obligations and responsibilities."

Now That's Interesting
A recent survey by consulting firm Accenture found that 85 percent of citizens would like to see the government use artificial intelligent assistants — think Siri or Alexa — to help them obtain services, according to a recent NextGov.com article.