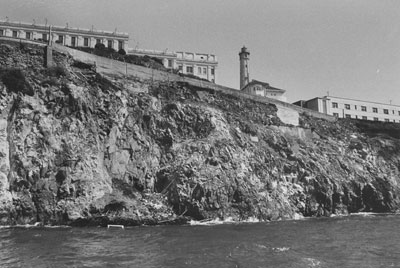 Alcatraz may not have been escape-proof, but that doesn't mean it was easy to break out.
Nat Farbman/Time Life Pictures/Getty Images

Despite the intense security, things didn't always run smoothly at Alcatraz Federal Penitentiary. There were several escape attempts from the escape-proof prison, including one that might have been successful.

Joseph Bowers was shot and killed while climbing a fence in 1936. Two prisoners managed to escape in 1937, but it's generally believed that they drowned, although their bodies were never found. The next year, three inmates attacked and killed a guard during an escape attempt. One was killed by another guard, a second was wounded and the third gave up.

A 1939 escape attempt was the seed of a fictionalized film,"Murder in the First," starring Kevin Bacon as Henri Young. In real life, Young tried to escape along with three others. They were found on the beach, where one escapee was shot and killed, another wounded, while Young and Rufus McCain were nearly incapacitated by the cold water. A year later, Young stabbed McCain to death in the prison workshop. Young's trial brought attention to the miserable conditions of the solitary confinement cells, where he was kept for extended periods. This eventually resulted in a conviction on a reduced charge, but Young wasn't quite the sympathetic character portrayed in the movie.

It's a 1962 escape that is perhaps the most famous. Brothers Clarence and John Anglin and Frank Morris spent long months patiently working at their plan. They chipped away with spoons at the rotted concrete around the ventilation grates in their cells, using cardboard painted to look like the original grate to disguise the work. When the holes were large enough, they could move into an open maintenance space, reserved for pipes and conduits. There, they constructed life vests and a raft out of raincoats they accumulated. Their absence from their cells at night was disguised by clever papier-mâché heads left on each pillow. Finally, the trio climbed ventilation shafts to the roof, hopped a fence and escaped into San Francisco Bay. Later, some personal items belonging to one of the Anglin brothers were found floating in a plastic bag, leading prison officials to declare the men drowned. They were never seen or heard from again, but the legend persists that they successfully made their way to nearby Angel Island or were picked up by a waiting boat.

Alcatraz during the prison riots of May 1946
Charles E. Steinheimer/Time & Life Pictures/Getty Images

In the first season of the TV show MythBusters, the show's crew tested the Anglin/Morris escape strategy, attempting to paddle across the bay on a similar makeshift raft. They successfully made it to shore after a difficult, unpleasant journey. While the experiment doesn't prove that the 1962 escape succeeded, it shows that such an escape was technically possible.

There were also several riots and protests by prisoners at Alcatraz, many due to the general conditions in the prison. In the 1950s, racist white prisoners rioted because of the presence of black prisoners in the same cell blocks. But the bloodiest incident in Alcatraz history happened in 1946. A band of six prisoners overpowered a guard and launched an effort to take over the entire prison. Several more guards were locked up (and later shot). Guards from nearby San Quentin prison joined with military troops to retake Alcatraz by force. Two guards were killed and three of the prisoners who had started the incident also died. Two of the surviving three were later killed in San Quentin's gas chamber.

In the next section, we'll find out how a nondescript island became a notorious prison.

The Worst of the Worst

Alcatraz's status as a federal prison led to the presence of some inmates who weren't the hardened crooks one might imagine. The concept of a federal prison was relatively new, and anyone convicted of a federal offense might be sent there. As a result, some of the cons at Alcatraz were convicted of lesser crimes, like shoplifting from a store that had a post office branch inside it or transporting bootlegged alcohol into another state.