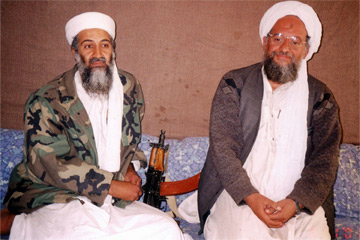 The past and present leaders of al-Qaida, as of December 2012. Osama bin Laden (L) sits with his then adviser Ayman al-Zawahri (and now leader) of al-Qaida post-bin Laden.
Visual News/Getty Images

Al-Qaida's structure seems to have undergone quite the transformation after bin Laden's death. The inflexibility of the hierarchy might even have been seen in the succession process; Ayman al-Zawahri was dubbed bin Laden's successor, which wasn't a surprise. But it took almost six weeks for al-Qaida to declare him the new leader. This could be because there was a very strict policy about getting all al-Qaida leadership to declare him emir. In fact, al-Qaida's 20-30 person leadership is so scattered that even a shoo-in like al-Zawahri may have had to wait awhile for the nod because communication is so difficult between the cells [source: Crilly].

Whereas before his death bin Laden seemed to be where the buck stopped in al-Qaida, there is now a "dune organization." That means a roaming group of networks that -- while still dedicated to installing Sharia law in Muslim countries -- have disparate, local, short-term goals [source: Wiseman].

But what does al-Qaida structure actually look like? Pretty insular, actually. According to a June 2012 story in the Toronto Standard by counterterrorism analyst Jason Wiseman, it follows this pattern:

It is currently believed that al-Qaeda operates as follows: a single trainer recruits others to form a cell; the trainer will then continue to travel and set up 3-5 autonomous cells in different locations. Only the trainer knows about the other cells and its members. Once these cells have been formed, the trainer will engage in an attack, often a suicide operation, erasing the link between the cells. As a result of this operational structure, attacks can be carried out by both al-Qaeda and its local affiliates in loosely defined intervals of time, achieving specific outcomes despite differing modus operandi and without rigid coordination.

So while the organization has changed, it's still a functioning entity that can create -- or support existing -- local networks.