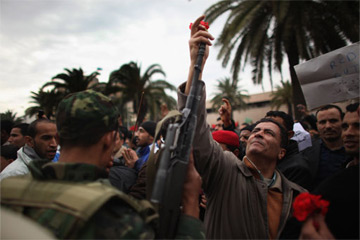 An image of peace from 2011's Arab spring. Here, a demonstrator places a flower in the barrel of a soldier's rifle after the ousting of Tunisia's then-president Zine al-Abidine Ben Ali. The Arab spring also created opportunities for groups like al-Qaida.
Christopher Furlong/Getty Images

When Osama bin Laden was killed in 2011, the structure of the organization had to go through a rapid transition. Formerly a hierarchy -- one where bin Laden had the final word on any operation -- there was now a void at the top. Combined with the loss of financing, the vision that once set apart al-Qaida from other Islamic extremist groups began to blur. Attacking foreign targets seemed a lot less practical than carrying out smaller terror operations on objectives in local networks.

As we said in the introduction, al-Qaida wants to replace secular states with extreme Islamic leadership and law. While before the means for doing this was to declare a holy war with the West and U.S., post-bin Laden has seen a marked shift in al-Qaida's spread (if not its message, which has remained steadily anti-Western). But that doesn't mean that the group is no longer a threat.

Consider that bin Laden's death wasn't the only momentous event in the Muslim world in 2011; the Arab spring also threw Islamic nations into upheaval. That upheaval could be quite fortunate for al-Qaida, as it provided an unstable, leaderless environment for loose terror networks to spread. While the decentralization of the organization doesn't lend itself to the bigger, bolder planned international attacks of the past, it does provide fertile ground for smaller cells to take hold and grow in unstable areas.

For example, al-Qaida has a fixed stand in Somalia, where it has partnered with al-Shabab (a strict Islamic extremist group that wrested some control of Somalia in 2009 during the Somali civil war). This also holds true for Yemen, where al-Qaida in the Arabian Peninsula (AQAP) flourished when al-Qaida members in Saudi Arabia escaped across the Yemeni border and stayed for the instability of the Arab spring. Countries like Mali, Nigeria and Algeria are all vulnerable to the group's influence, because of the weak leadership that's endemic to African nations that face extreme poverty and volatility.